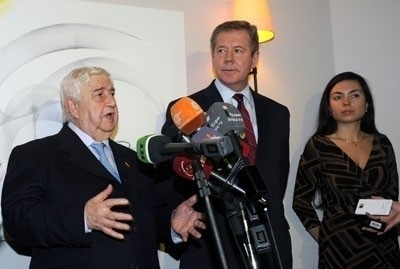 Foreign and Expatriates Minister Walid al-Mouallem, met with Russian Deputy Foreign Minister Gennady Gatilov in Geneva on Thursday to discuss the Syrian-Russian relations, the meeting in Geneva and the necessity of following up this process through implementing Geneva Communique item by item.

Mouallem said discussions were particularly aimed at stopping the violence and combating terrorism as the first item of Geneva communiqué.

The positions of the the two sides were identical in the importance they placed on all states’ commitment to international resolutions related to combating terrorism and concentrating efforts on combat this phenomenon which forms a dangerous threat to security and stability in Syria, the region and the World.

The two sides agreed during the meeting to continue coordination and consultation in all issues to serve the interests of the two friendly countries and peoples.

Following the meeting, Mouallem said at a joint press conference with Gatilov that combating terrorism is a duty of each Syrian citizen who aims to preserve his homeland.

Mouallem said agreement on the item of counterterrorism confirms which parties are partners in building the future.

Gatilov confirmed that the political solution is the only way to solve the problems in Syria, put an end to violence and terrorism and find suitable conditions for a prosperous future to Syria and its people.