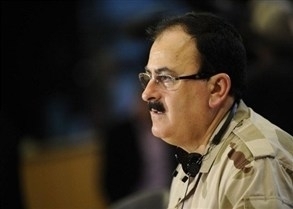 In a video broadcast on the Internet, the rebel coalition said its military council had decided to replace Idrees because of “the difficulties faced by the Syrian revolution” in its battle with President Bashar al-Assad’s regime.

Idrees’s has led the main Syrian armed opposition group since Dec. 2012 after defecting from Assad’s army where he held the position of general.

The announcement comes amid stalled peace talks between the Syrian government and opposition in Geneva, and a renewed spate of fighting on the ground in the war-torn country.

“The time spent by Salim Idrees as FSA chief was characterized by ineffective [leadership], weakness, and strong divisions, particularly in the past few months,” said Abdullah Nasser al-Ayed, a military analyst.

Idrees’s leadership had been under question for some time.

In December, the opposition Syrian National Coalition’s defense minister, Asa’ad Mustafa, said that Idriss had failed in his post.

“Salim Idrees has failed to make an institution,” he said, according to the London-based Daily Telegraph. “I don't think everything can continue in the same way.”

Meanwhile, the chief of Lebanon’s Shiite movement Hezbollah, Hassan Nasrallah, vowed on Sunday that the group would win against extremists fighting in neighboring Syria, according to Agence France-Presse.

“We will win this battle, God willing,” he insisted, after describing the group’s role in the conflict in Syria as a fight against “takfiris” – extremist Sunni Muslims.

Hezbollah, a staunch ally of the Syrian regime, has dispatched fighters to the conflict to bolster government troops, finally admitting their presence in April 2013.

The three-year-old conflict in Syria has fuelled Sunni-Shiite tensions in neighboring Lebanon and across the wider Arab world. It has drawn in militants who fight on both sides and receive funding and arms from rival regional powers.

“If you want to prevent this region from falling into chaos that will not end for decades, stop the war on Syria,” Reuters quoted Nasrallah as saying, addressing all political forces in the Arab world.