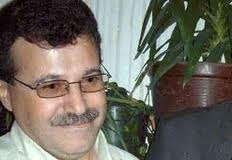 The Syrian intelligence authorities released renowned writer and journalist Akram al-Bunni one day they had abducted him.

"I spoke to him, and he is on his way to his mother's house," Shammas said.

The wrote on her Facebook page that her father had been released.

"We are waiting for all the other prisoners of conscience." She added.

Bunni, who had previously spent two decades as a political prisoner, was snatched Monday by agents from an intelligence division run by Hafez Makhlouf, a cousin of President Bashar al-Assad.

His brother Anwar al-Bunni, a human rights lawyer who was also a political prisoner for five years, said Akram had riled the authorities by publicly supporting a democratic alternative to the four-decade rule of the Assad family.

“This regime has not been satisfied that it stole 20 years of Akram’s life and the affect that left on his health,” Anwar al-Bunni told Reuters on Sunday from Damascus.