There is resentment after nuns were released after being held by the opposition, but not Assad's own officers 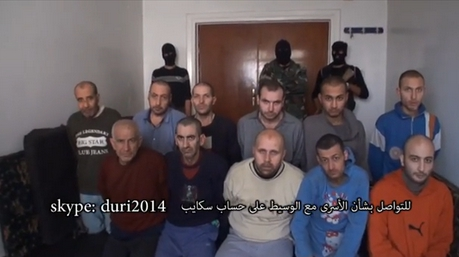 The media office of one of the military factions in eastern Ghouta has broadcast a video showing a number of prisoners from the pro-regime Shabbiha appealing for help and demanding their relatives and acquaintances to put pressure on the regime to seek their release and exchange them with detainees from the opposition.

The prisoners also demanded a halt to the bombing on the eastern Ghouta and break the siege surrounding about one million people living there.

The video showed eleven prisoners seemingly in a good condition, without any signs of beatings or torture. The prisoners sequentially stated their names and the names of their areas and specific names of the officers and judges who know them, asking them to put pressure on Assad's regime for their release.

Prisoner Zuhair Mahmoud, from Tartous, appealed to his family and a number of his relatives working with the state to try to release him, a demand repeated by Basil Muhammad from Salamiya and Ihab Said Samara, a Christian from the Horan, who appealed to Pope Francis to put pressure on the regime to release him.

Mazen Jawdat Mahmoud, who identified himself as an Alawite, asked the Alawite officers exert pressure for his release. As for Wael al-Ubaid, who is about fifty years of age, he was almost crying, begging all the Alawite officers pressure the regime to work on the release of the prisoners and detainees.

The same sentiment was echoed by Duraid Ali Rajouh, who also identified himself as an Alawite, and Yassin Hassan Abdul Ghafoor, Shadi Ismail Maqsoud and Nizar Hassan al-Salibi from Salamiya, and Mohammed Amer Qirbas from Dumair.

It is noted that a wave of resentment has swept among the soldiers and Shabbihas working with the regime and many of the Alawites after a deal for the release of nuns captured by the opposition. The Assad regime, which claims to protect the Alawite sect, was accused of completely ignoring any Alawite prisoners working in its ranks when captured.