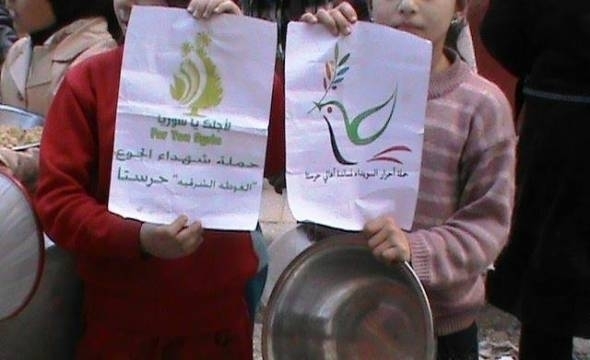 Sweida Kitchen is a simple initiative by a former detainee from Assad prisons from Sweida, located in Harasta on the outskirts of Damascus.

Most volunteers who work there are also from Sweida.

Laila, an activist and supervisor at the Sweida kitchen said it has been working for two months. "It is just a simple initiative where activists collect donations to buy primary ingredients to cook food and distribute it to cover 250 families in need in Harasta," she said.

Most funds comes from personal donations from the people of Sweida and Syrians overseas, according to the activist.

“As a result of high prices, people have become unable to attain their minimal needs of food, therefore, we thought of founding the kitchen, as we are in contact with rebels who are able to bypass the siege of Ghouta," Laila added.

The supervisor said that food is prepared from affordable ingredients that are also rich in nutrients, such rice, bulgur and legumes, hoping to be able to cover as many people in need as possible.

Laila said that the simple initiative a solid proof of the unity between people in Ghouta and Sweida. “They are all Syrians,” she said.

Laila detailed that the cost  of the initiative at about 1,500 SP daily. She explained that high cost resulted from the high prices of ingredients.