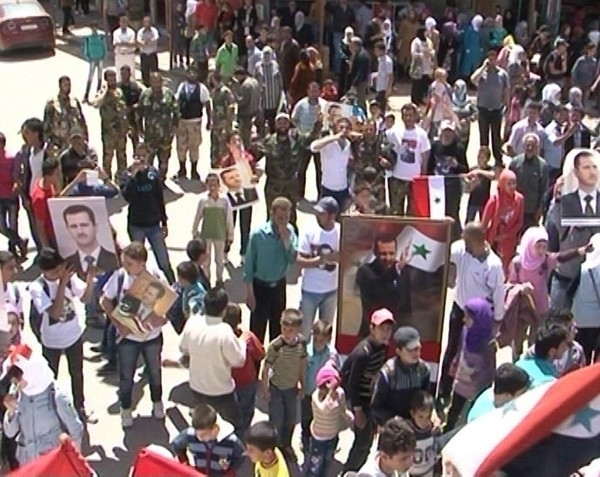 Residents form the town of Halboun and the surrounding areas in Damascus countryside staged a show of support that saw large crowds take to the streets in appreciation of the Syrian army.

The Governor of Damascus countryside, Hussein Makhlouf said the people turned out to emphasize support to the Syrian army which is fighting terrorism to restore security and stability, indicating that the people will remain united in confronting takfiri terrorism.

Citizens of Khan Arnabeh town and the villages surrounding it also took to streets in support of the Syrian Arab Army in its war against terrorism.

The participants waved national flags and raised placards glorifying the meaning of martyrdom, and calling for enhanced national unity.

They also affirmed adherence to national principles and rejected any foreign intervention in Syria's internal affairs, hailing the role of the Syrian Arab Army in uprooting terrorism imposed on the country.

Baath Party member from the Quinetira branch, Alam-Eddin Hassoun stressed the need for accelerating efforts to come out of the crisis as soon as possible to start rebuilding what was sabotaged at the hands of terrorists.