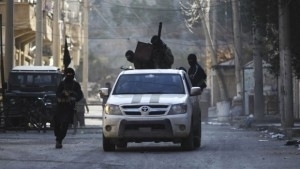 Syrian Islamist rebel group the Al-Nusra Front said on Sunday it would agree to orders from the Al-Qaeda leader Ayman Al-Zawahiri and stop attacks on its rival the Islamic State of Iraq and Syria (ISIS).

A statement posted on the Al-Nusra Front’s website said it would not “initiate any attacks, but will retaliate to any attacks by ISIS against it or against any Muslims.” The statement added: “We announce our acceptance of the orders of Sheikh Ayman Al-Zawahiri to stop any attacks against ISIS while ensuring they do not attack Muslims.”

The statement also said the group would follow Zawahiri’s orders to establish a Shari’a court to look into differences between the two sides, which have been fighting for months in various areas in Syria.

It said: “We announce our acceptance of the court and will follow it as soon as it is established.” The Al-Nusra Front also agreed to Zawahiri’s calls to cease publishing statements critical of ISIS.

Zawahiri’s orders came in a 26-minute audio message which was posted on a jihadist website on Friday.

The two groups agreed to a truce on Friday after several days of fighting in the eastern province of Deir Ezzor on the border with Iraq, which killed more than 60 rebels and displaced thousands of civilians, according to the Syrian Observatory for Human Rights, a UK-based monitoring organization.

However, a Free Syrian Army (FSA) official, speaking on condition of anonymity, told Asharq Al-Awsat that the Al-Nusra Front’s decision to meet Al-Qaeda’s conditions may not be implemented because much of the violence between the two groups was initiated by ISIS.

Violent clashes between ISIS and other Islamist rebel groups, most notably the Al-Nusra Front, have been continuing since January, leading to around 4,000 deaths so far.

In February, Al-Qaeda leaders announced they had disowned ISIS and called on it to withdraw from the war-torn country, saying the Al-Nusra Front was now the official branch of Al-Qaeda in Syria. ISIS is considered to be the group’s Iraqi wing.

A number of opposition factions have accused ISIS of working for the Syrian government and criticized it for applying a strict form of Islamic law in territory under its control, issuing arbitrary fatwas and kidnapping and killing many fellow rebels and civilians.

In an escalation of the conflict between Syrian factions and Islamist organizations, the Al-Nusra Front reportedly arrested Ahmed Al-Ni’mah, a senior rebel military commander in Dera’a in the south of the country, and several officers on Sunday.

Rami Dalati, a member of the FSA Military Command’s Higher Council, told Asharq Al-Awsat he believed an FSA battalion may have arrested Ni’mah and his supporters and handed them over to the Al-Nusra Front.

He said the chiefs of staff’s command had considered dismissing Ni’mah due to “violations and individual actions” he had committed.

Dalati said he thought Ni’mah’s announcement a few days ago of the formation of the Southern Syria Revolutionary Front was “a prelude to a decision such as this,” adding: “This announcement angered a number of groups who were active on the ground, including Al-Nusra Front, which has great authority.”

The Al-Nusra Front issued a statement following the formation of the new grouping, warning it would target its members.

The Observatory issued a statement on Sunday which said: “The Al-Nusra Front will refer Ni’mah to the Shari’a Court on charges of surrendering the town of Khirbet Ghazaleh, home town of head of political security Maj. Gen. Rustom Ghalaleh, to the regime’s forces.”

However, Dalati said the issue was exaggerated and that there was no truth in reports that “Ni’mah conspired with Ghalaleh to surrender the town to the regime’s forces and that he was slow delivering military support and ammunition to the fighters.”

According to the Observatory, Ni’mah succeeded in uniting rebel groups in the Dera’a governorate and talked in a meeting about the importance of uniting efforts, and that “the organized FSA which believed in democracy and the civil state would be the party that would rule Syria until the elections, not the extremists who are supported by outsiders.”