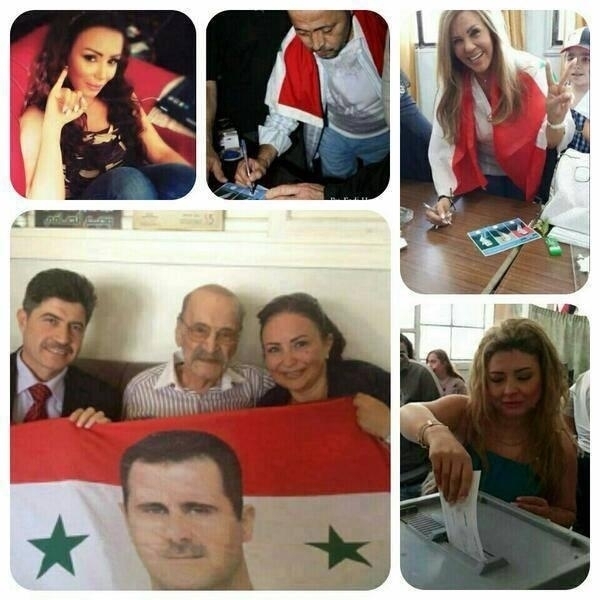 It was Tuesday, 3 June, the presidential election day in Syria.  Bashar Assad supporters painted their faces in the colors of the official Syrian flag near polling stations in Damascus, shouted, sang and danced, while holding up pictures of him.

Other drivers blasted songs glorifying Assad: "We are your men, O Bashar!"

Simultaneously, mortar’s shells rained down on many neighborhoods around Damascus and the sound was heard at some polling stations.

In Aleppo city, both East and West had a terrible day. The liberated areas were heavily bombed with explosive barrels, while the pro-regime neighborhoods were also hit by many mortar shells, something criticised by the Islamic Front.

In Hama, people woke up to songs glorifying Assad and its regime, like “Got safeguard you Assad," and "We are your men, O, Bashar”. The city was almost empty, with only the sounds of explosions disturbing the quiet. It was discovered that FSA had destroyed four gathering points for the regime, and an Addonia TV channel van, besides attacking the airport.

The election was only held in regime-controlled areas, and the opposition called for a boycott. It is estimated that 40% of Syrian land is under the Syrian army control, while 60% of Syrian people live there.

Many social networking sites hosted an open conversation between Assad supporters. On one, a woman generously offered to provide a service to those who wanted to vote but were abroad or could not attend a polling station, asking them to send her a copy of their ID card via Whatsapp, and she would vote for them all.

Some offered non-Syrians who felt they have Syrian blood to vote.

In many cities, people were coerced to vote; All employees, teachers and university lecturers were forced to attend to work with no permit for leave for any reason. Moreover, all university students had had their ID cards held until they voted. Pro-regime forces and Shabbiha paramilitaries checked people’s fingers to see the trace of the election ink as proof of voting. Moreover, they forced people in bus stations to attend to polling stations to vote.

In the middle of this surreal situation, Assad and his wife, Asma attended a polling station in the Malki neighborhood, smiling as they confidently placed their votes for him.