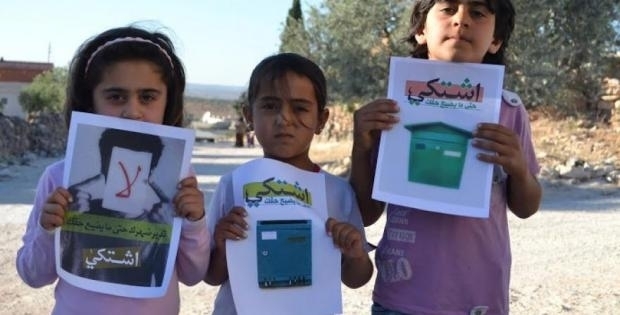 The Day ِAfter organization (TDA), in collaboration with local councils, civil society institutions, and military councils in the province of Edlib, launched a campaign under the title of 'Complain In Order Not To Lose Your Rights', in May, that contrinued through to July, 2014.

The idea of ​​the campaign was born from what the organization said was "the necessity of holding the Free Syrian Army abusers accountable". Activists of the campaign are concerned with the social dimension of the revolution, especially after witnessing people's fear at raising their problems with those holding weapons.

Activists' responsibility towards society has obliged them to confront the problem. The campaign began work through coordination with the TDA, which funded the campaign. Communications officials set the goals and timeframe for the work in each region, taking into account the specificity of each area.

The campaign aims to confront "any abuser, whether from the Free Syrian Army or civilians, and work to respect the rights of citizens in expressing their opinion, to preserve the dignity of citizens, and to achieve the objectives of the Syrian revolution in freedom, justice and dignity, which means breaking the fear barrier against all armed people and reach a civilized society," the TDA communications team told Syria Untold.

Campaign activities include graffiti paintings on the walls and in public squares, using slogans like: 'Complain in Order Not To Lose Your Rights' and 'Your Voice Builds it, Your Dignity Is Our Concern, in addition to drawing large mural boards and posters about the campaign. Meetings were also held between the Free Syrian Army and citizens to discuss the usefulness of sending complaints, and encouraging people to break the fear barrier.

Activists issued a special statement for the campaign from the Syria Rebel Front, stating that "any perpetrator of violations against civilians would be held to account". Some armed fighters are even involved in the campaign, which facilitated the work of activists in areas held by different organizations, such as Ehsim in Jabal al-Zawieyah and the eastern countryside of Maarat al-Numan, which includes Hass, Kafr Ruma and Kafranbal. The campaign is dedicated to the opposition-held regions (but not all of them), but activists hope it will later include all regions in Syria.

Obstacles working against the campaign included the absence of a cadre capable of covering all different regions simultaneously, in addition to the difficulty of working under difficult conditions that included air strikes and poor humanitarian conditions. However, the team said it was able to mitigate the impact of these obstacles "by working as a team and by a continuous coordination with the organization which always follows-up the campaign matters".

Perhaps the biggest obstacle is the difficulty in persuading citizens to provide complaints, especially as we are in a society that suffered from a long legacy of tyranny, and needs an intensive civil activity and awareness campaigns that work on a "better rehabilitation for workers to communicate with citizens, especially troubled souls".

The campaign aims to achieve the basic goals of the revolution in freedom, justice, equality and defeating tyranny, without allowing any military or civilian force to tyrannize people again, seeking to make the citizen a center for its work by teaching him not to stay silent about errors that come both from either the regime or from the sons of the revolution themselves.