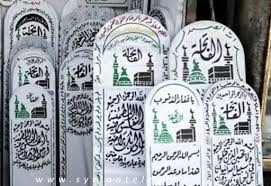 The Syrian capital has witnessed a terrifying rise in graves prices in the regime-held areas.

The new phenomenon emerges as President Bashar Assad begins his new presidential term and as judges and lawyers benefit from the absence of state's control during the crisis in the country.

Lawyers and judges obtain licenses from the government to build cemeteries and then specify the prices the way they want. The result is that the price of one grave has now reached more than 1.2 million Syrian Pounds.

As theses cemeteries became a property of lawyers and judges, they have set very high prices, to the extent that the people of ash-Shaghour neighborhood in the heart of the capital asked the government to prohibit these cemeteries because the project damages their old cemeteries, especially because they are being built in the middle of the road.

The director of Burials Office in Damascus governorate, Midhat Uthman, said that the office is applying the decision taken by the governorate to give licenses to those who want to dig a grave and finds a good place for it.

Residents of Ash-Shaghour did not provide an official complaint to investigate the situation. the problem is not limitied to Bab as-Saghir, but extends to all the cemeteries in the capital, where people are under pressure. The office said it is trying to find a solution to the problem.

Assad's lawyers and judges applied conditions on the families of martyrs, despite the fact that the Damascus governorate had specified much lower prices in November 2013 as follows:

It might be worthy to mention that some cemeteries were targeted by Assad's troops and air forces, especially during the funerals of martyrs, so hundreds of cemeteries were completely destroyed.