An alleged ISIS slogan written on a school wall in Riyadh translates as: "Here to stay, grow bigger" 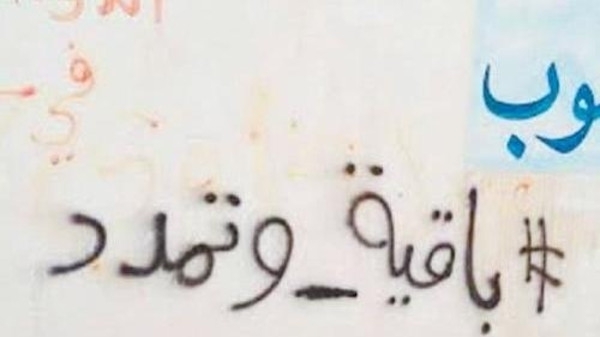 The residents of al-Naseem neighborhood in eastern Riyadh were shocked when they saw the alleged slogans of Islamic State (IS) on the walls of some schools, Al-Hayat daily reported.

A number of residents who spoke on condition of anonymity said they suspect that a group of young men were behind it.

The young men did not look religious but used to stay up till late on the streets near the schools, the residents said.

He said: “Our society is very passionate about Islam and Muslims. “That is why it is easy to take advantage of young men’s feelings, especially in the absence of awareness campaigns.

“It has become a breeding ground for misconceptions and confusion.”

He said imams and parents needed to take responsibility for educating young people about the dangers of such deviant ideas.

Battah dismissed as untrustworthy a questionnaire claiming 92 percent of respondents believe IS complies with the Shariah. The questionnaire was carried out on social media.

A media campaign should be launched to protect young generations against such ideas, he said.

Assakina Campaign for Dialogue, an organization that fights extremist ideologies through dialogue, is planning to poll the Saudi public on IS.