After fleeing the war raging in Qadam, he moved from one place to the other, and finally settled in a Damascus' neighborhood. Abu Ahmed used to work in a zone designated for auto repair shops, however, he now has no choice but to commit a violation by working on a street in the city center 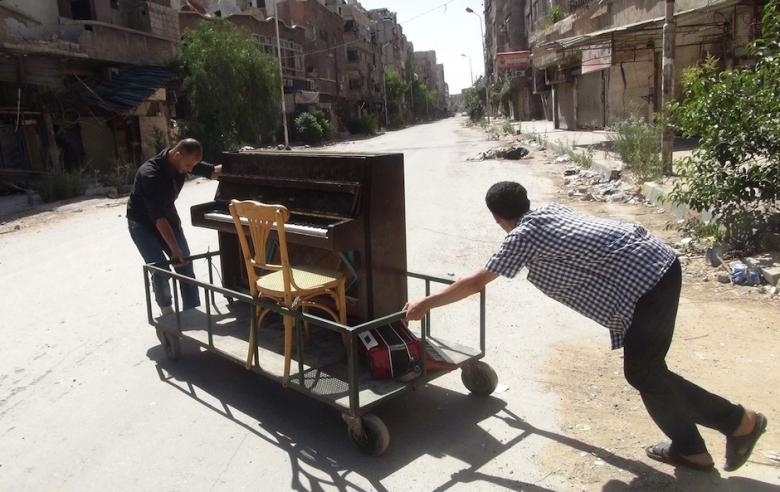 The events in Syria did not only change the demographics in the country, but also brought major changes to the economic map and the geographic distribution of different professions. In the past, the regions of Damascus and its countryside were divided on the basis of the occupations dominating each area. However, the situation has now changed as chaos has spread.

Damascus –Near The October Stadium in the region of Baramka, Abu Ahmed placed what was left of his tools aside and hung a banner indicating that there is a “mechanic” in the area. He hoped to attract some of the people passing by and to resume the career he had practiced for 10 years in al-Qadam.

After fleeing the war raging in Qadam, he moved from one place to the other, and finally settled in a Damascus neighborhood. Abu Ahmed used to work in a zone designated for auto repair shops, however, he now has no choice but to commit a violation by working on a street in the city center.

He said that before the crisis, authorities in the district of Damascus forbade auto repair shops from operating on the streets as they caused too much noise and pollution.

However, Abu Ahmed was prompted to carry what was left of his tools and to hit the streets to meet his financial needs after seeing other people doing the same thing in other regions. He also benefited from the fact that one of his relatives owned a car equipment shop in Baramka.

He admitted that his work is in violation of the capital’s rules, but apparently officials are looking the other way in order to allow people to make a living.

Auto repair workers were not the only ones to be displaced after operating for many years in designated centers in Hosh Palace, Kafarsousa and Qadam. They have now moved to Damascus’ neighborhoods, especially the important areas.

A source in Damascus’ governorate explained that the occupations’ map has completely changed in Syria, and there are no more areas designated to particular professions.

He pointed out to Sabqa region, once known as the “furniture capital” of Syria, since large factories were operating there, making furniture to be sold in the Damascus market and in other regions. Today, Sabqa has been deserted by its residents and clashes there have not stopped since the beginning of the crisis.

This also applies to the towns of Hamouriyah, Arin and Daraya, once renowned for their famous furniture and carpentry industry. The owners of these factories opted to move to the capital or to other safer districts, with many leaving the country or bearing great losses.

He admitted that his work is in violation of the capital’s rules, but apparently officials are looking the other way in order to allow people to make a living. Today in Damascus, it is no longer easy to acquire certain commodities. When shopping for a car for example, you will be met with limited options which would require a tiring quest, searching for cars in the regions of Mazra’a, al-Qousour and al-Zahira.

A local shop owner revealed that as the clashes in the Palestinian Yarmouk refugee camp escalated, he closed down his shop on Street 30 (considered along with Harasta road, a main center for car dealerships in the capital) and moved to Zahira. Other people soon followed and shops selling car equipment opened later, forming a small market, in addition to the many shops distributed in other areas, he said.

Despites its many negative aspects, this new occupational chaos gave the residents of Damascus the advantage of getting their cars fixed near their homes, instead of taking risks by going to distant areas like Hosh Palace.

Commenting on the situation, a member of Damascus Handcrafters Union assured that Hosh Palace has been secured and some of the shop owners started to come back. However, others have not been convinced to return yet.

He said the union is holding contacts with the governorate to encourage people to return, calling for helping shop owners by providing them with electricity.

A source in the governorate of Damascus said local authorities are calling on all professionals to move to the industrial zone. It has already dedicated 150,000 sq. meters for this purpose, in coordination with the Damascus Chamber of Commerce.

Certainly, not all professions can be relocated since some require “heavy machines that cannot be transported from the regions witnessing heated clashes.”