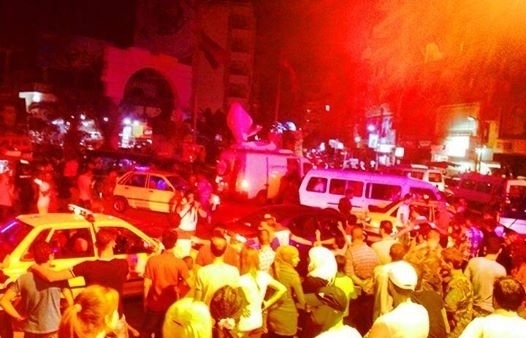 The events of the night of Saturday, 6 September in Dweilaa, Kashkool and Jaramana, in Damascus, when opposition fighters entered the Dukhania neighborhood, were traumatic for all who witnessed them.

Thousands of people fled their houses minutes after the attack begun, running through the streets of Kashkool, carrying all that they could to Dweilaa or Jaramana.

Upon arriving in Jaramana, panic spread among the people of the neighborhood and they too also left their homes, heading to Suweida in the south of the country. The people of Dweilaa started to leave their homes as soon as those fleeing Kashkool arrived, joining crowds of those escaping the scene, which lasted for more than two hours.

Assad troops and People Protection Committees then intervened to calm those fleeing the assault. Despite the messages of reassurance sent through mobile phones, and the arrival of military reinforcements, as well as direct TV broadcasts from Jaramana intended to calm people down, many residents of the neighborhood were seen carrying their luggage and heading to Damascus and further.

"It was a painful scene, similar to what we saw in movies, when a herd of animals runs away from danger," said one resident.

"Two days after the horrible scene, it is still possible it could be repeated. If someone says the armed groups arrived, people will run away. This is exactly what happened on Saturday."

Another resident, who refused to leave the neighborhood, although he packed his bags, said that "When people get mad, your brain will be useless. Unfortunately this was our situation on Saturday. Panic and hysteria infected everybody and everybody wanted to escape because they lost their trust in Assad's army and his armed militias."

"People don’t believe the Syrian official media anymore, after what happened in Maloula, Sadad, Brigade 17, Tabqa airport and the ash-Shaer fields, which are all evidence that Assad's troops can abandon their people at any moment, just as they gave up their soldiers who were slaughtered in Shaer, Tabqa airport and Brigade 17".

In fact, half of the people of Dweilaa and Kashkool have left their homes, and some are still leaving to safer areas. The people of Jaramana escaped to Suweida, the relatively safe Druze area.

In order to calm down people and encourage them to stay, water and electricity were not cut from these neighborhoods during the night.