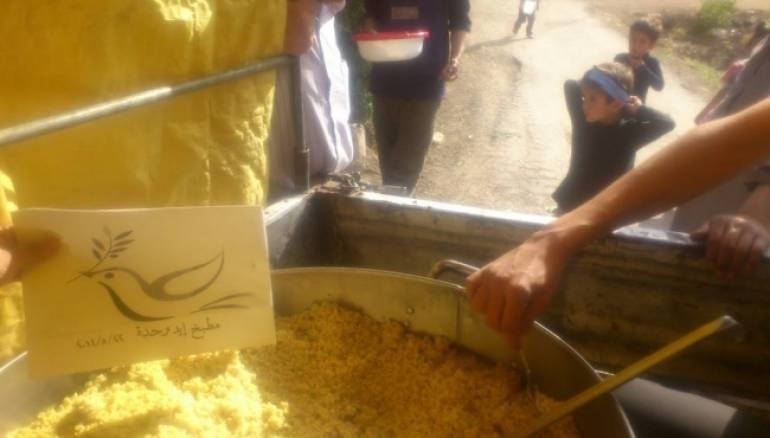 The Eid playground swings in Harasta are once again waiting for their children, after activists in the city, eager to bring the joy of Eid to the streets of the besieged Harasta, announced what they called "a challenge against death".

The activists set up the swings inside closed and secret buildings because they are afraid of the regime's continuous shelling, in a determined effort to bring joy to the children at Eid.

According to the director of the One Hand campaign, Leila, many civil institutions have donated to buy presents for Eid and these have been smuggled through secret paths to the besieged city.

"The civil institutions in Harasta are cooperating with the humanitarian aid office which delivers aid to the inhabitants of the city. We are trying to cover as many families as possible," Leila said.

Leila added that 200 kg of Shakiriyeh and 200 kg of rice and bulgur will be delivered in the first day of Eid to 50 families.

Leila said the children of Harasta have asked the activists to help them celebrate the Eid, thus they are waiting for additional money to be allocated to buy gifts, toys and candies for the children who forgot the taste of Eid.

"We want to bring joy to them again. Syrian activists in Turkey have collected $200 this will be spent to buy gifts for the children in the city. The gifts will be bought from Damascus and then smuggled to Harasta," Leila explained.