Low temperatures and lack of any means of heating in Rastan 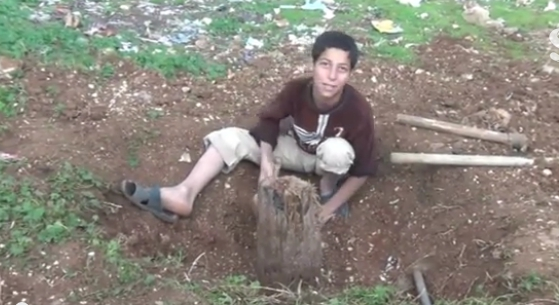 Taha, from Rastan, is about 14 years old. He lives with his father, mother and three younger sisters in a small home in an area which is bombarded daily.

When you first look at the house, you think its empty, but when you approach it, you see and hear the stories of everyday life this family lives. The lack of money, the difficulty of securing living needs, the poor clothes that do not prevent them from summer heat or winter cold, seem almost unreal.

Winter arrived early and hard this year, with the low temperatures and lack of any means of heating. Taha and his father had no choice but to cut the roots of the trees that have already been cut in the past for fuel.

To be able to cut the roots, they have to dig in the dirt around the root at depths of up to two meters, a process which exhausts grown men of endurance, not to mention children.

Taha comes out every morning, wandering the streets searching for the roots of trees that have not been cut yet, especially since many of the city's residents have resorted to the same method, leaving behind holes similar to those left behind by the regime army shells.

Even if he found the roots of a tree, a new story of misery begins, as he has to extract the root, which may take from early morning until the evening, and break it into small pieces to take to his house, where his family uses it for heating and cooking. Taha's work throughout the day burns in the firewood for heating and cooking.