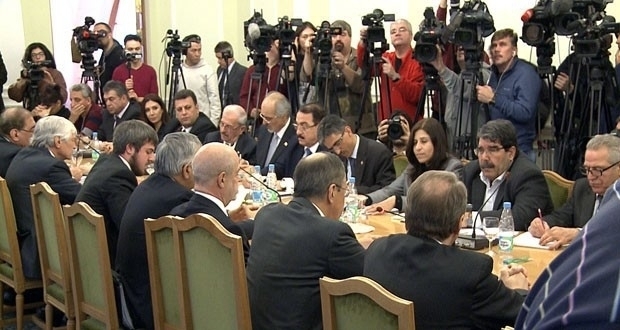 Discussions between delegates from the Syrian government and opposition figures concluded on Thursday in Moscow.

The government delegation, together with five opposition parties and other figures agreed to a set of principles presented by Russia, labeled the “Moscow Principles”.

The principles focus on preserving Syria’s sovereignty and unity, fighting all forms of terrorism, settling the crisis peacefully and politically, and rejecting foreign interference.

The Moscow Principles are as follows:

Over the past four years, the unprecedented spread of terrorism in the Syrian territory has left tens of thousands of victims among citizens and caused millions of others to suffer.

Furthermore, terrorists and extremists have been brought into the Syrian territories from all corners of the world, with our country facing grave dangers, most serious among them are the extremist factions attempting to impose barbaric rule, which has nothing to do with the honorable values of the Syrian people and has torpedoed the deep-rooted tradition of peaceful coexistence among their various components.

Additionally, its economic and social structures, which were built by the efforts of generations of Syrians, are being destroyed, and its invaluable cultural, historical and civilization heritage is being pillaged, stolen and vandalized.

Based on the above mentioned issues, all the peaceful national forces in the Syrian society and those who love their homeland are required to take decisive measures to change the situation as soon as possible.

In this regard, it is necessary that political foundations for a national Syrian-Syrian dialogue be laid, which would enable all Syrians to settle urgent issues on the national agenda through a comprehensive national dialogue without preconditions.

Among those are the following principles:

1 – Maintaining the sovereignty, unity, independence and territorial integrity of the Syrian Arab Republic.

2 – Combating terrorism in all its forms and manifestations, and seeking a concerted effort to fight the terrorists and extremists operating on Syrian land.

3 – Settling the crisis in Syria through peaceful political means on consensual ground, based on the principles of the Geneva Communique of June 30, 2012.

4 – Determining Syria’s future on the basis of a democratic and free expression of the Syrian people’s will.

5 – Rejecting any foreign interference in the Syrian affairs.

6 – Maintaining the army and the armed forces as an embodiment of national unity, and preserving and developing the state institutions.

7 – The rule of law and respecting the principle of citizenship and equality among citizens before the law.

8 – Rejecting any foreign-armed presence on the territories of the Syrian Arab Republic without its government’s consent.

Participants of the Moscow consultative meeting express their thanks to the government of Russia and the Institute of Oriental Studies of the Russian Academy of Sciences for hosting this meeting and are looking forward to continuing the Syrian-Syrian consultative meetings in this regard.

Earlier, sources from Moscow reported that every group of opposition figures presented its own paper, claiming no agreement was reached on any joint paper, with the opposition Coalition-backed Coordination Committee rejecting the “Moscow Principles”.

Information received from the Russian capital also indicated a semi-agreement to continue meetings in Moscow, to be determined at a later date.

Closed-door meetings that brought together representatives of various opposition factions were held last Monday and Tuesday as part of the meetings which, according to Russian Foreign Minister Sergey Lavrov, seeks to provide an avenue and forum for discourse with representatives of the Syrian government.