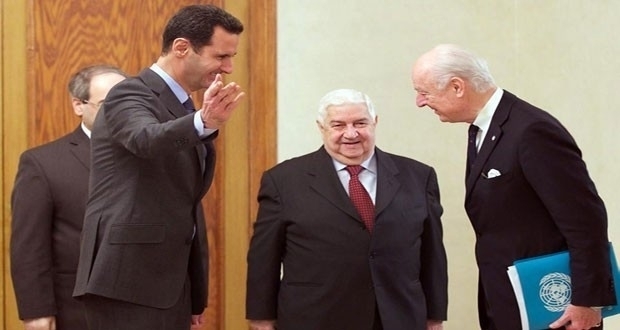 During the meeting, the two sides discussed the new details in de Mistura’s plan on freezing fighting in Aleppo.

President Assad reiterated Syria’s commitment to supporting any initiative or idea that helps to resolve the crisis and to preserve the lives of citizens and state establishments.

The president also stressed the need to pressure all states to implement Security Council resolutions nos. 2170 and 2178 on stopping the funding of terrorists and their flow into Syria.

De Mistura spoke in a brief statement to journalists before leaving Damascus that he held extensive talks with President Assad during the two-day visit, and that his mission is currently focusing on facilitating the political process to reach a political solution for the crisis in Syria.

The UN envoy said he discussed his suggestion on freezing fighting in Aleppo, but that he could not offer any further details on the discussions.

De Mistura said he is currently working towards reducing the violence affecting the Syrian people, while working to deliver humanitarian aid in a controlled manner and at an increasing rate, adding that he will submit a report to the UN Secretary-General and participate in a Security Council meeting on Syria on February 17. No further details were given.