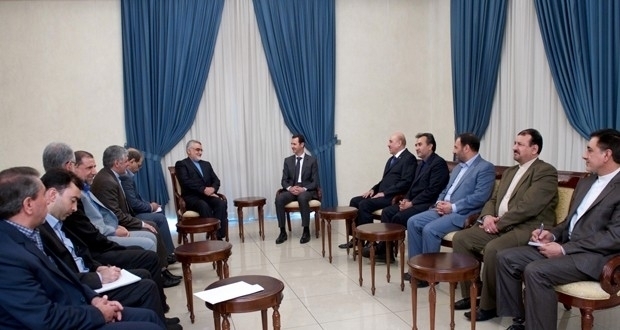 The meeting focused on the fraternal relationship between Syria and Iran and the commitment of both countries’ leadership to continue bolstering cooperation and coordination on all levels and in all fields.

The officials also discussed the continual support provided by several states and regional forces to terrorist groups who are used to pursue these countries' own interests at the expense of the region’s stability.

Boroujerdi stressed that the determination and steadfastness of the Syrian people, coupled with the strength of their army and leadership, are capable of defeating terrorism and those who support it, affirming that Iran is committed to continuing its support and will spare no effort to help the Syrian people until victory is achieved.

The chairman declared that no force in the world could affect the unique relationship between Syria and Iran and their commitment to realizing their mutual interests and restoring stability in the region.

For his part, Assad thanked the Iranian government and people for their support in the face of terrorism, asserting that the escalation of the war by terrorists and their supporters has failed with the help of friendly states like Iran.

The president also congratulated Iran for its achievements regarding the Iranian nuclear issue, saying that the Syrian people view these achievements as a victory for all those who believe in just rights and causes.