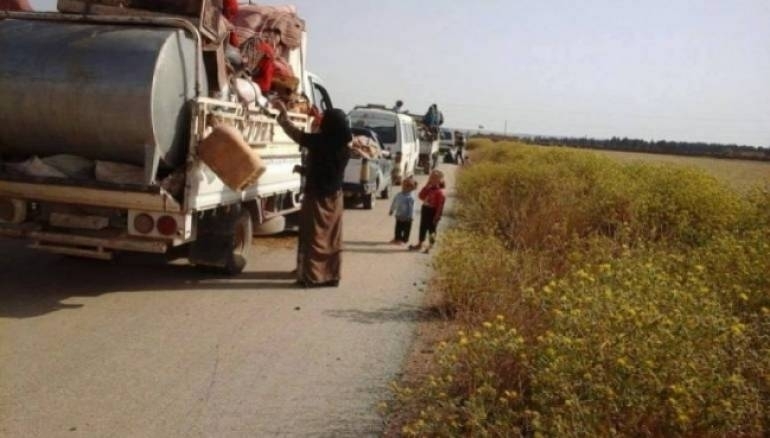 Dozens of villages in the region of Jabal abdul-Aziz witnessed heavy displacement on Monday as clashes intensified between forces of the Kurdish Democratic Union Party (PYD) and ISIS amid continued airstrikes by the US-led coalition.

Yasin al-Ma’eeshi told Zaman al-Wasl that people from dozens of villages in the northern part of Jabal Abdul-Aziz attempted to escape fearing being mass arrests and looting by the approaching Kurdish forces.

Locals also fled fearing a siege in the event the road to Hassakeh is closed, the activist said.

Ma’eeshi mentioned that people are suffering from a shortage of food and aid, with a shortage in transportation options forcing people to escape on foot through the steep mountainous routes.

Moreover, dozens of men gathered at the roadside, begging passersby to transport their families.

The activist mentioned that the conditions of war have deepened the suffering of people who already live in poverty, lacking medical care and healthy living conditions, as no doctor is available.

Local sources claim armed PYD groups were engaged in an operation around villages controlled by ISIS, with assistance from airstrikes by the US-led alliance on ISIS bases in Jabal Abdul-Aziz region, Tal Shommar and Tal Nasri near Tal-Tamer.

The PYD’s Hawara news agency confirmed the operation around all fronts of Ras al-Ain, Tal-Tamer and Hassakeh to the village of Tal-Masamir, mentioning that all supply routes to 23 ISIS-controlled villages have been closed.