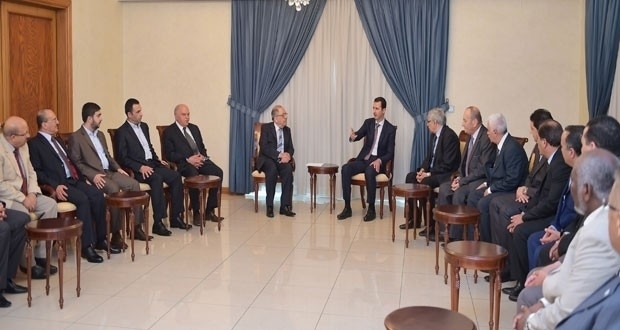 President Bashar al-Assad has warned of attempts at undermining Arab culture and identity, saying these are the greatest risks currently targeting the Arab nation.

The president’s remarks came during a meeting with members of the General Secretariat of the Union of Arab Teachers and heads of affiliated organizations, who took part in the union’s 19th conference in Damascus.

Assad highlighted the significant role education institutions and other popular regional organizations could play in entrenching awareness of Arab identity and maintaining the Arabic language.

The president referred to the role of these organizations as “fortifying the new generation against the cultural invasion of the obscurantist extremist thinking which has become an existential threat to the Arab Nation”.

Assad called for institutionalizing the work of the Arab organizations through integrating their roles and holding extensive meetings in service of defending the interests of the social strata they represent.

Representatives of the Union of Arab Teachers said holding their meeting in Damascus this year reflects their full solidarity with Syria in the face of the terrorist aggression, which aims to undermine its pan-Arab position and commitment to its independence.

The representatives added that they will carry a message back to their countries that Syria will emerge from its crisis victorious thanks to the resilience of its people and the sacrifices of its army.