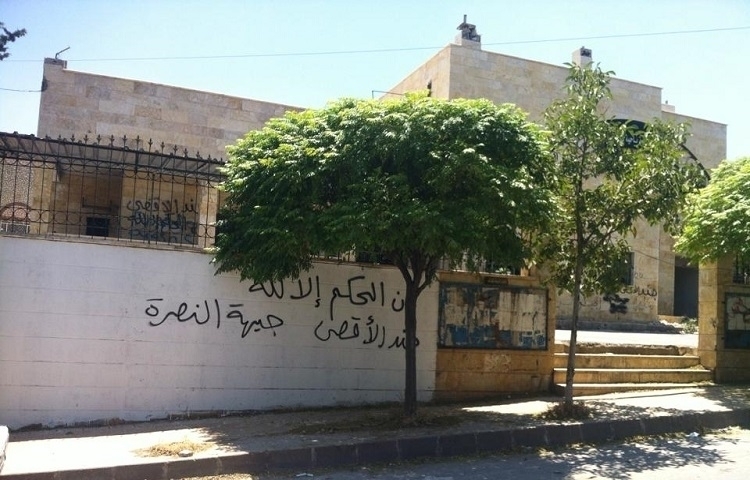 Nusra Front and Jund al-Aqsa fighters armed with heavy machine guns stormed the Sharia Court and police station in Kafranbel in Mount az-Zawiyah on Wednesday. The attack coincided with a similar attack on the police stations in Khan Shaykhun City and the town of Kafr Sajna in the countryside of Idleb.

Media activist Samer as-Salloum said a joint force of Nusra Front and Jund al-Aqsa raided the police station and the Sharia court in Kafranbel, then closed shops in the surrounding areas.

Salloum explained in an interview with Enab Baladi: "the force arrested all those who were in the building, including the judges, confiscated the contents of the station and the court, and arrested a number of people in the city".

The activist noted the development follows a recent campaign launched by the two factions on Kafranbel, stressing that in the moment of preparing the report, arrests were being carried out against people from inside their homes.

According to a member in the security battalion of the town of Kafranbel, the arrest campaign included policemen and a number of court judges, such as Judge Ayman Baiyoush.

The member justified the campaign, saying: “the police in Kafranbel do nothing but give the impression that the city has functioning institutions, when actually, they receive their salaries without providing any services".

Eyewitnesses from Kafr Sajna said that fighters of the two factions stormed the town’s police station, arresting at least three policemen, in addition to confiscating the station’s vehicles.

The raid included the police station in Khan Shaykhun, while the rebel groups did not officially declare the incident.

The Nusra Front is considered a major faction in the province of Idleb, and it has been accused of committing a number of violations against civilians in the province, most notably the arrest of a number of activists and Free Syrian Army fighters over the past two years.