Aircraft crashes due to 'technical-glitch' during the shelling of a neighborhood in Ariha, monitoring group says 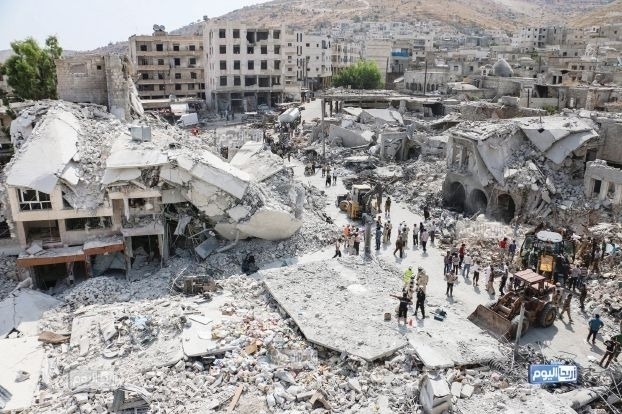 More than 70 civilians were killed or injured when a Syrian military aircraft crashed due to a “technical glitch" during the shelling of an opposition-held city in northwestern Syria.

The director of the Syrian Observatory for Human Rights, Rami Abdulrahman, told AFP: "a warplane crashed during the shelling of a neighborhood in the opposition-held city of Ariha in Idleb. The plane was flying at a low altitude when a technical glitch led to its crash." Abdulrahman said the plane crash had also injured more than 60 others.

Abdulrahman said at least 31 people died, including two children, according to medical sources and locals, adding: "five of the victims have not yet been identified." The Observatory initially reported the deaths of 12 people from the neighborhood, which then rose to 23, while the fate of the plane's crew is still unknown.

The Observatory was unable to determine whether the 31 victims were killed as a result of the crash or because of the shelling that preceded the crash, while local residents reported that the crash occurred near a vegetable market causing a “huge explosion”.

Since March, regime forces have lost a number of strategic towns in Idleb province, including the city of Idleb, Jisr ash-Shughour and Ariha following fierce battles against the Islamist coalition of Jaish al-Fatah (Army of Conquest).

Rockets fell on areas in the regime-held towns of Fua and Kefraya, while "sporadic clashes continued after midnight between the pro-Assad forces on the one hand and the Nusra Front and other Islamic factions on the other hand," according to the Observatory. "Regime helicopters dropped explosive barrels on areas in the city of Binish yesterday, while unidentified gunmen opened fire on Atamah camp for displaced people near the Syrian-Turkish border, which led to several injuries among the residents of the camp, some of them are in critical condition", the monitoring group added.

The Nusra Front also executed the former leader of an Islamic faction in Mount az-Zawiyah on charges of "theft and fraud". The Front had also recently executed a lawyer in Khan Shaykhun in the countryside of Idleb on charges of “dealing and communicating with regime forces, and leaking information” regarding the headquarters of the Islamist group.