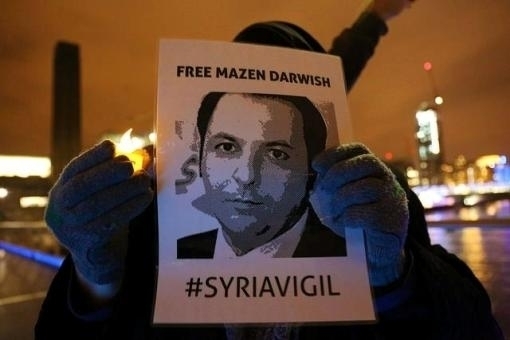 Mazen Darwish was released from prison August 10, 2015, after an arbitrary arrest that lasted three years, five months and 23 days. Darwish will remain on trial until the date of his hearing on August 31, 2015.

Syrian authorities released the journalist and human rights activist after a 23-day delay in the application for presidential amnesty issued July 19, 2015. Authorities persisted to refrain from including Darwish’s case in the presidential decree issued in June 2014 in accordance with Article No. 8 of the Terrorism Act, issued in April 2012, providing full amnesty to those who face punishment. Article No. 8 includes "the promotion of terrorist acts", a charge laid against the 2013 Reporters Without Borders winner and 2015 UNESCO Prize winner.

The Syrian Center for Media and Freedom of Expression congratulates Darwish who has rightfully restored his freedom, and also thanks all human rights organizations, the legal defense, the individuals and all those who supported the detainees of the center, namely its founder Mazen Darwish, since the raid by Air Force Intelligence on the center’s headquarters in Damascus February 16, 2012.

We renew our call on the authorities to release all prisoners of conscience in Syria immediately.