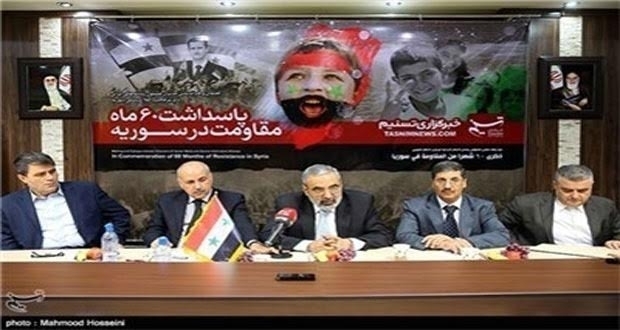 Minister of Information Omran al-Zoubi on Monday held a meeting with Iranian news officials at the headquarters of Iran’s Tasnim News Agency in Tehran.

Minister Zoubi is heading a Syrian media delegation to the three-day session of the Islamic Radios and Televisions Union “IRTVU” meeting being held in the Iranian capital with the participation of regional and international media organizations and figures.

Responding to questions on the reasons behind the “military failure” in confronting terrorists in some areas, Zoubi said: “There is no failure at all … but in guerrilla warfare, each area has its private conditions,” citing Palmyra city as an example, stating thousands of citizens would be killed and the city’s archaeological monuments would be destroyed in the event of a regime aerial campaign against ISIS fighters in the area.

The minister indicated that in some confrontations, Syria’s armed forces have also withdrawn from up to 10 villages in order to preserve other highly strategic areas.

Zoubi said that the Nusra Front and ISIS fighters attacked Aleppo city with arms that have not been used in any previous war, weapons which can only be found inside Turkish, Saudi, and Jordanian military stockpiles.

Zoubi dismissed rumors of a recent so-called Saudi-Syrian meeting regarding bilateral security and political issues, saying: “There hasn’t been any Syrian-Saudi meeting until now and no one went to Saudi Arabia and no one came from Saudi Arabia.”

“Saudi Arabia can’t say that it is against terrorism, in a time when it supports [the Islamic State] ISIS, the Nusra Front and other terrorist organizations,” Zoubi clarified, adding: “The regime which kills the Yemeni people can’t participate in solving the regional crises,” describing Saudi diplomacy as a “trembling policy.”