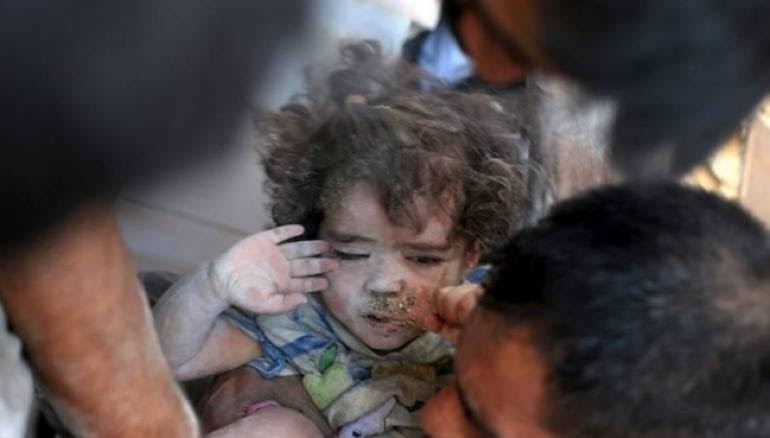 At least 52 people were killed in Douma on Saturday as the Assad regime expanded its aerial campaign on the rebel-held town northeast of Damascus, only six days after Syrian fighter jets massacred 117 civilians in the city’s main marketplace.

Rescue workers said 20 bodies had been identified, while the identities of a further 32 victims were being investigated, with the death toll expected to rise as civil defense workers step up the search amid the rubble of the multi-storey buildings.

The deadly air strikes came six days after Sunday's massacre, which killed 117 people and wounded 532 others when regime warplanes dropped vacuum bombs on a crowded marketplace, according to monitoring groups.

Human Rights Watch has urged the United Nations to impose an arms embargo on the Syrian government after Sunday's attacks, which the rights group said demonstrated the regime's "appalling disregard for civilians."

But Damascus has insisted its war is waged against "terrorism", as Foreign Minister Walid Muallem defended last week's attacks. "Many of the terrorists use civilians as human shields, so what is claimed about massacres in Douma or elsewhere is fabricated news," he said.

Douma is part of the rebel-held Eastern Ghouta area, which is regularly targeted by regime shelling and bombardment and has faced a suffocating siege for nearly two years.