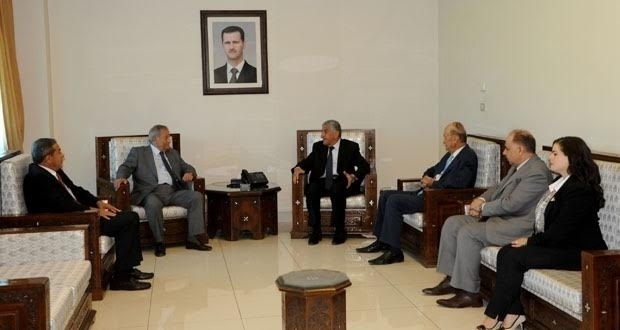 Syria has confirmed it would respond to any honest and serious initiative for finding a solution to the crisis, while also working to combat terrorism and restore stability and security to all areas, Assistant Foreign Minister Hamed Hassan said Tuesday.

Meeting a delegation from the World Federation of Engineering Organizations (WFEO) and the Federation of Arab Agricultural Engineers, Hassan noted the role of Syrian diplomacy in explaining the truth behind the terrorist threat, thereby changing the distorted image created by biased media outlets concerning events in Syria.

WFEO President Marwan Abdelhamid said the steadfastness of the Syrian people, army, and leadership in combating terrorism has resulted in a shift in Western opinion, which had bet on the undermining of the Syrian state within a few months.

Abdelhamid added that Syria’s victory in its battle against terrorism is a victory for all Arabs and a guarantee for the security of the region.