ISIS discontinued the economic life cycles in the areas under its control, monopolized businesses such as oil refineries and internet cafes 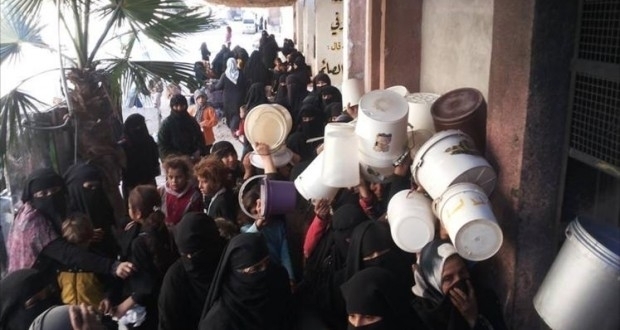 ISIS discontinued the economic life cycles in the areas under its control, monopolized businesses such as oil refineries and internet cafes, and took over public utilities including electricity and water. In the mean time, the businesses of people in these regions are confined to transportation, agriculture, and small trades.

Abu Younis at-Tadmouri, an activist from Palmyra, said: “ISIS deprives the people of Palmyra from their income sources. It prevented the employees from going to their work, the students from attending their universities, and the movement of the citizens of the city is restricted to ISIS-held areas between Raqqa, Al-Mayadin, and Mosul.”

ISIS has prohibited the employment of women, except for pro-ISIS women and the wives of ISIS fighters.

Dr. Muhsen, a professor of the Faculty of Economics at the University of Aleppo, said that he is currently unemployed and that his daily work is to go to the mosque and return home, wearing the same clothes as ISIS’ followers: a short thawb.

Dr. Muhsen denies that ISIS intervenes in his daily life: however, he says that job opportunities are limited here and that one either has to swear allegiance to the organization and obatin some privileges or suffer from poverty and unemployment.

ISIS monopolized the fuel trade and issued special cards to its supporters that allow them to transport fuel from opposition-held areas to ISIS-held areas. The group opened special markets for this trade, while the upper echelon of the organization controls the oil trade between ISIS on one side and the regime and neighboring countries on the other.

The agricultural sector within the ISIS-held areas witnessed huge losses as a result of the takeover of wide areas of agricultural lands, and the confiscation of the residences of their owners.

Abu al-Mutasem, a resident of the town of Ar-Raii in the eastern countryside of Aleppo, said: “ISIS fighters confiscated my house after I refused to shelter one of them. I told them I have daughters and I was concerned about them, but the organization’s only answer was throwing me out of the house. They confiscated my land, too”. Difficult economic conditions imposed by ISIS pushed hundreds of young men in those areas to join the organization to earn a proper amount of income or to gain power that can be tempting to them.

Nasser Mohammed, an activist, said that nearly 1,200 young men from the city of Palmyra joined ISIS during the past few days, having exhausted all opportunities to live in the city.