The warplanes also targeted the towns of Harasta, Zamalka, and Hummouriah, injuring a number of people and destroying houses 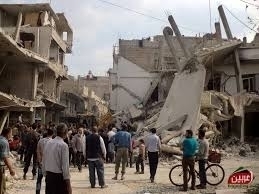 Regime warplanes attacked the city of Erbin on Tuesday morning, September 1, targeting residential areas and markets in the city, which led to deaths and injuries among its residents.

The Unified Information Office in Erbin stated that the eight raids that targeted the city killed five civilians and injured dozens as the military campaign on the city enters its 47th day.

The warplanes also targeted the towns of Harasta, Zamalka, and Hummouriah, injuring a number of people and destroying houses, while the outskirts of the Jobar neighborhood were bombed from the south.

Our correspondent at Enab Baladi said that warplanes bombed a number of areas in the city of Douma and that several mortar shells landed in Al-Baydar area, leading to civilian injuries.