Laham was speaking at the meeting held on the sidelines of the Fourth World Conference of Speakers of Parliament at the U.N. Headquarters in New York City 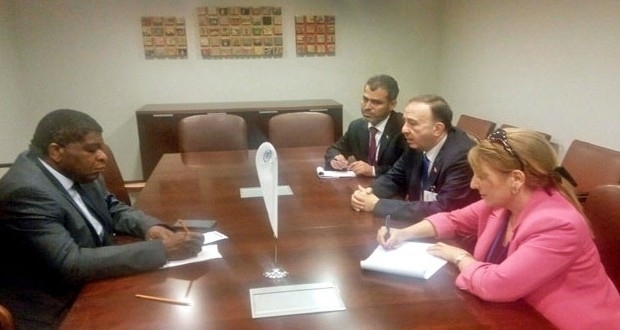 On Wednesday, speaker of the People’s Assembly Mohammad Jihad al-Laham discussed with Secretary General of the Inter-Parliamentary Union (IPU) Martin Chungong several topics including the situation in Syria and the surrounding region, and cooperation between the Assembly and the IPU to confront terrorism and extremism. They also discussed ways to press state sponsors of terrorism to stop violating the international law.

During the meeting held on the sidelines of the Fourth World Conference of Speakers of Parliament at the U.N. Headquarters in New York City, Laham called for increased cooperation and coordination among parliamentary institutions worldwide towards peace and development. He also urged them to stop wars as well as foreign intervention in the internal affairs of sovereign states.

In a meeting with former IPU president Abdul Wahid al-Radi, Laham affirmed: “Syria has launched initiatives to promote reconciliation among Syrians and to promote reforms and the rule of law in the country. Nevertheless, some countries in the region – notably Saudi Arabia and Turkey – continue their support of terrorism.”

Later at a dinner banquet in New York, Laham met several leaders of the Syrian community and told them that Syrians abroad represent their motherland and her message, forming a source of power against external pressures.

Syria is represented by the delegation led by Laham at the Fourth World Conference of Speakers of Parliament, which began on August 31.