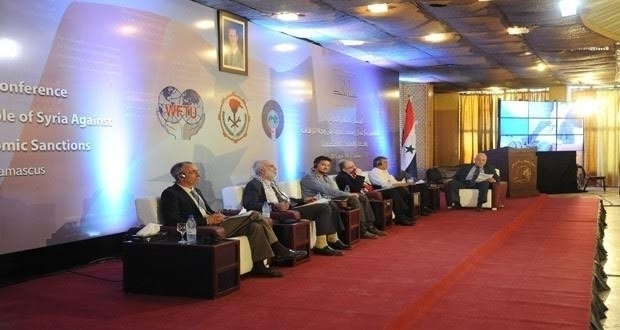 Participants at the second session of the International Trade Union Conference (ITUC), in solidarity with workers and people of Syria against terrorism, blockades and economic sanctions, have denounced the economic sanctions and siege imposed on Syria by imperialist countries.

Members of the conference also expressed the previous day their support for Syria in facing takfiri terrorism targeting its people and territory to serve the imperial powers.

The ITUC vehemently criticized the policies practiced by global capitalism that plunders and steals from the working class all over the world, asserting: “the conspiracies hatched against Syria were written by [an] American pen and Israeli ink and read by Arab tongues to undermine the Syrian people’s will.”

Member of the Regional Leadership of the Arab Socialist Baath Party Mohammad Shaaban Azouz stated: "the promise of victory began appearing in various countries that were suffering from terrorism such as Cuba, Iran, Venezuela and Syria will follow them soon."