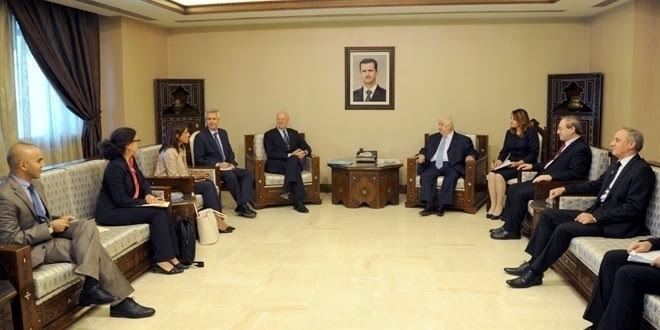 United Nations Special Envoy for Syria Staffan de Mistura responded to questions from Syrian authorities in Damascus Thursday regarding proposed work teams for his plan to find a political solution to the crisis in Syria.

The envoy clarified that the objective of the meetings held by work teams would be brainstorming and non-binding, adding that whatever the Syrians come to agree on may be useful in the process of preparing for Geneva III.

Foreign Minister Walid al-Muallem, for his part, reiterated that fighting terrorism in Syria is the priority as it constitutes the entry for a political solution to the crisis and meets the Syrian people’s aspirations for establishing security and stability.

Muallem said that Syria will study the ideas put forth by de Mistura in order to take the appropriate stance towards the UN-backed initiative.

The foreign minister also stressed the importance of continued consultations between the UN envoy and the Syrian government in this regard, underscoring the need for concerted regional and international efforts for combating terrorism.