Activists launch Twitter hashtag rejecting the truce, stressing that negotiations should be terminated as they only serve the Assad regime and Iran 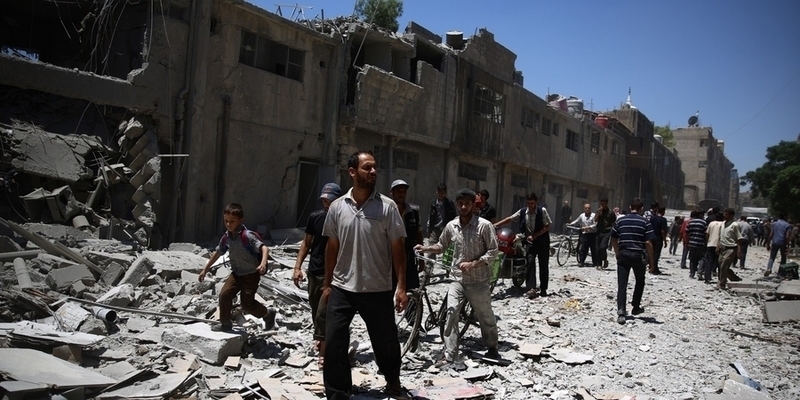 Syrian activists expressed their rejection of a ceasefire agreement in the border town of Zabadani, reached on Sunday, September 20, stating that an acceptance of the agreement would be unjust to the rest of Syria’s regions currently shelled by Assad's forces.

The two negotiating sides, which included representatives from Ahrar ash-Sham Islamic Movement and Iran, agreed to a 48 hour truce to commence at 12 pm Monday. Negotiations will continue regarding a lasting solution to the conflict in the regions of Zabadani and Madaya in the countryside of Damascus, and the towns of Kefraya and Fuaa in the countryside of Idleb.

Muhannad Abu Zein, a media activist from the city of Daraya, wrote on Facebook: "I'm not here to accuse anyone of betrayal or to evaluate anyone, but this is the message of a city that feels wholly betrayed as if it were an island in the middle of the sea … My message to anyone negotiating with the regime is that the revolution is ‘We’. This means that when we wish to negotiate, we must take into account all the rebellious cities."

In an interview with Enab Baladi, Abu Zein explained he is not against the idea of ​​reaching a truce, but will reject any agreement that is individual and does not include all Syrian areas.

Abu Saleh Doumani, an activist from the city of Douma in eastern Ghouta, said: "I'll say it openly and publicly; Ghouta, which has been besieged for three years, has endured all the aches and pains of the surrounding areas which reached a ceasefire agreement with the regime, I mean Doumair, Rahibh, Barza, Tel and Wadi Barada … Today Ghouta has to withstand all the aches of Syria’s areas which have reached a truce with the criminal regime."

Media activist Samer Salloum from the countryside of Idleb, wrote: "since the beginning of the battle in Fuaa and Kefraya, we sacrificed 300 martyrs, hundreds of wounded fighters, a number of prisoners, tens of vehicles, dozens of tons of explosives, completely destroyed villages and towns whose entire populations have been displaced for months, and the result was a truce."

Activists on Twitter launched a new hashtag rejecting the truce under the title "#No_truce_with_Iran", in reference to the ongoing negotiations with Tehran’s representatives, stressing that negotiations should be terminated as they only serve the Assad regime and Iran.

Opposition websites and social networking pages recently leaked the purported terms of the agreement, most notably: "the ceasefire between the two sides, with a truce for six months, including the cities and towns of Zabadani, Madaya, Kefraya, Fuaa, Idleb, Binnish and Tuom."

The truce also states that all militants and civilians in Zabadani will be allowed to relocate to Idleb, in exchange, 10,000 residents from Fuaa and Kefraya – children under the age of 18, women, the elderly above the age of 50, in addition to the wounded – would be permitted to leave these two regions. The regime has also agreed to release 325 women and 125 children from its prisons and detention centers.