Terrorism is wiping out all achievements made by Syrians towards achieving development, envoy tells representatives at UN summit 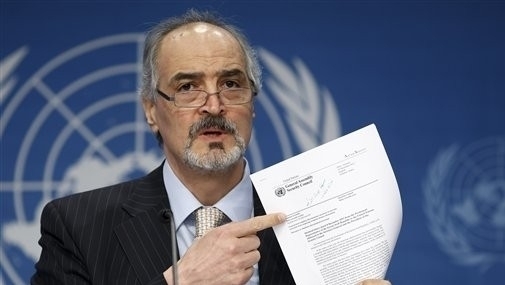 Syria’s Permanent Representative to the United Nations Bashar al-Jaafari has called for the inclusion of fighting terrorism in the UN’s post-2015 Development Agenda, claiming it is a priority for ensuring sustainable development.

Addressing the 2015 UN Sustainable Development Summit on Saturday, Jaafari said terrorism is chief among other elements that are holding back development in Syria.

“Terrorism is burning up everything all around and wiping out all the achievements made by the Syrians towards achieving development,” added Jaafari, explaining that Syria’s economy, infrastructure, resources, its youth’s potentials and civilization are all jeopardized by terrorism.

The ultimate goal of the terrorists and their backers, he added, is to destroy Syria and what it stands for as “the most important fortress of moderation, tolerance and peaceful co-existence in the region.”

Jaafari highlighted the grave threat posed to Syria’s environment due to terrorists’ random oil and gas extraction and sale practices, referring also to the “regrettable draining” of the Syrian cultural heritage at the hands of the Islamic State (ISIS) and other terrorist organizations.

In light of Syria’s suffering from the scourge of terrorism, Jaafari said, “we strongly support that the adopted document mention and consider combating terrorism as a priority to achieve sustainable development.”

The representative noted that combating terrorism should be based on principles, primarily observing the UN Charter and international law, also underscoring the serious repercussions of the economic sanctions imposed on various vital sectors on development in Syria.

With the trade, finance, investment and energy sectors affected, he said, these sanctions have caused massive losses, leading to a sharp drop in development levels. In turn, this reflects badly on the Syrian people’s living standards, who are suffering from a severe shortage of food and medicine, Jaafari added.

Commenting on the recent phenomenon of migration away from Syria, Jaafari said it is the result of the “wrong approach” by some countries in dealing with the situation in other developing countries, including a lack of seriousness in economic support and an involvement in fueling crises and interference in internal affairs.