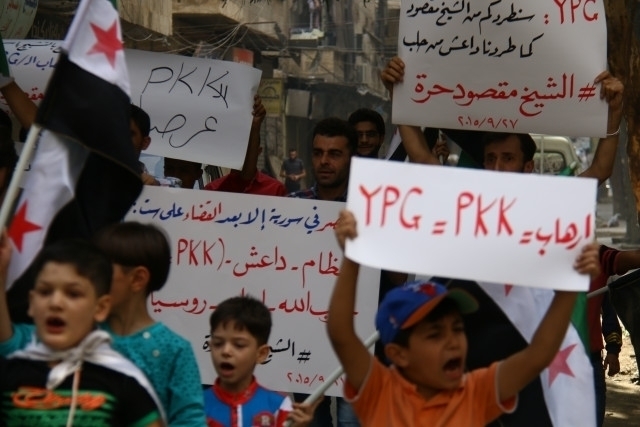 Activists and residents of the Salah al-Din neighborhood in the city of Aleppo demonstrated against the practices of Kurdish People Protection Units (YPG) in the neighborhood of Sheikh Maqsoud on Sunday, September 27.

Dozens of citizens of the liberated neighborhood have denounced the abuses allegedly carried out by YPG units in the neighborhood of Sheikh Maqsoud during the past few days.

The activists displayed banners quoting "YPG, we will drive you out of Sheikh Maqsoud as we expelled ISIS from Aleppo" and "There is no victory in Syria unless we eliminate the regime, ISIS, YPG, PKK, Hezbollah, Iran and Russia.”

Clashes continued for the fourth day in a row between the opposition factions and YPG units stationed in the Kurdish neighborhood of Sheikh Maqsoud, as YPG factions attempt to secure a crossing between the neighborhood and regime-held areas in the city of Aleppo.

Rebel factions had been forced to close al-Castelo street to "preserve the lives of civilians" after the YPG units targeted the street with missiles and machine guns, leading to the death of a man and a woman while they were traveling in their car, local sources said.