Locals call for restoration of security and stability, boosting trust between citizens and officials, discussing the issue of missing people, and supplying aid 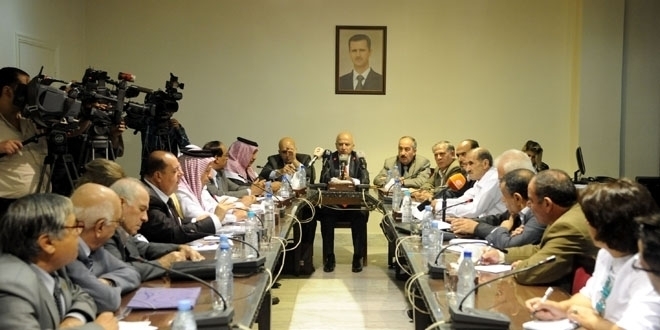 Meeting with the National Reconciliation Committee on Wednesday, locals from Jobar in the countryside of Damascus said the town had fallen victim to terrorism like other areas where radicals had been allowed to run amok, adding that families had lost their properties, livelihoods and the peaceful lives they once led.

Residents from the neighborhood said that many of the town’s citizens wish to embrace national reconciliation, but are afraid of violent reprisals from terrorist organizations.

Townspeople called for focused efforts on restoring security and stability to Jobar, boosting trust between citizens and officials, settling the legal status of youths who have decided to lay down their weapons, discussing the issue of missing people, and sending food aid.

In turn, Committee head Omar Osi pointed out the success achieved by reconciliation efforts, most notable of which was the settling of the legal status of more than 700 people in Daraa, asserting that the initiative will expand to cover more areas in Damascus countryside and elsewhere.