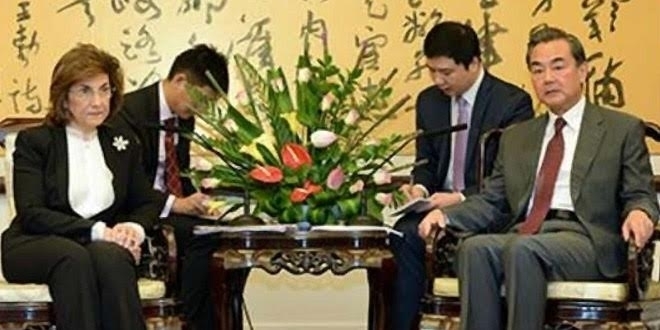 During the meeting, Shaaban briefed Wang on the crisis in Syria and the latest political and military developments, particularly the Russian-Syrian counterterrorism cooperation, and the various roles played by regional and international sides in the war on Syria.

She lauded China’s positions towards the crisis in Syria and its support for the Syrian people, discussing in detail bilateral relations and issues of mutual interest.

Wang, for his part, stressed the need for combining international efforts to combat terrorism in cooperation with countries embroiled in fighting terrorism in a manner that doesn’t violate states’ sovereignty.

The foreign minister also asserted the inevitability of finding a political solution for the crisis in Syria, underlining the importance of international cooperation to help alleviate the humanitarian crisis, in addition to reiterating China’s support for Syria’s sovereignty, independence, and territorial integrity.

Wang concluded by affirming that Syria’s future must be decided upon by the Syrian people, away from all forms of intervention, and that China will do its best to help achieve that.