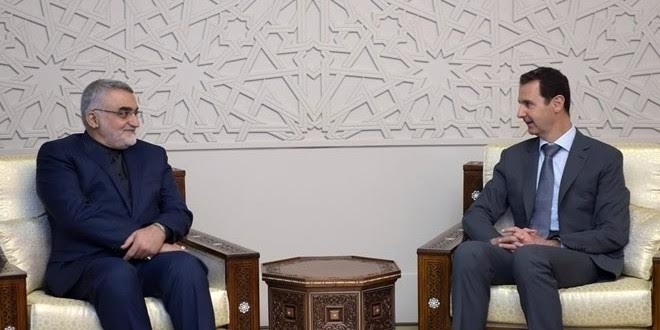 Speaking with Chairman of Foreign Policy and National Security Committee at the Iranian Shura Council Alaeddin Boroujerdi on Thursday, President Assad said the efforts by friendly countries to enhance Syria’s steadfastness in the battle against terrorism, chiefly those by Iran and Russia, will bear fruit that will be yielded by all peoples of the region and the world.

The meeting touched on the situation in Syria and the region, and the positive developments made in the course of the fight against terrorism, especially upon the recent formation of the intelligence sharing alliance, which comprises Syria, Iran, Russia and Iraq.

Boroujerdi, for his part, reiterated the importance of strategic relations between Syria and Iran, stressing Tehran’s readiness to further strengthen these ties.

According to the Iranian official, fighting terrorism in a way that preserves the national security of both countries is a major area of cooperation that Iran is keen to consolidate.

Boroujerdi also expressed Iran’s satisfaction at the progress of fighting terrorism after the formation of the intelligence sharing alliance – a progress, he said, which has exposed the failure of the US-led international coalition and its false claims regarding its fight against terrorism.