Countries that refuse to coordinate with the Syrian-Russian counter-terrorism alliance are offering a 'free service' to ISIS and Nusra Front, says People's Assembly speaker 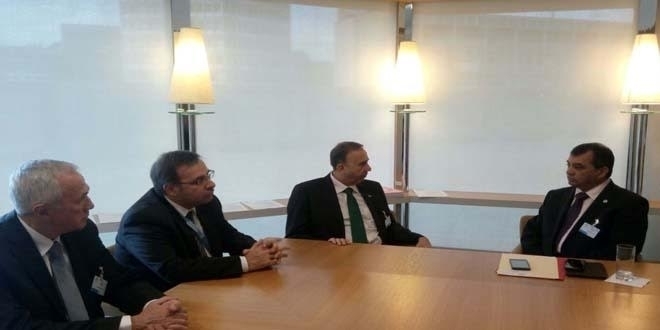 Speaker of the People’s Assembly Mohammad Jihad al-Laham discussed on Monday with Chairman of the Federation Council of Russia Valentina Matviyenko the role of parliamentary diplomacy in enhancing international efforts to combat terrorism and bolstering international security and peace.

During the meeting on the sidelines of the 133rd Assembly of the Inter-Parliamentary Union (IPU) which commenced in Geneva on Saturday, Laham affirmed that Syrian-Russian cooperation in combating international terrorism is a turning point in the international efforts to face the cancerous phenomenon of terrorism which is expanding throughout the region.

The speaker expressed Syria’s appreciation for Russia’s role in combating terrorism side by side with the Syrian and Iraqi governments.

Laham said that countries which criticize the Syrian-Russian alliance in fighting terrorism and at the same time refuse to coordinate with Syria and Russia on the issue are offering a free service to the Islamic State, Nusra Front and other terrorist organizations.

Matviyenko, for her part, reaffirmed Russia’s support for the Syrian state and people in their war against terrorism.

Laham also reviewed with IPU Secretary General Martin Chungong and IPU President Saber Chowdhury the latest developments in Syria and the region and IPU’s role in supporting the diplomatic efforts to resolve conflicts away from external interferences.

Chungong and Chowdhury expressed their satisfaction with the level of cooperation between the IPU and the People’s Assembly in Syria.