Moscow to consider proposal from US to convene international meeting on Syria, with the participation of Jordan, Turkey and Saudi Arabia 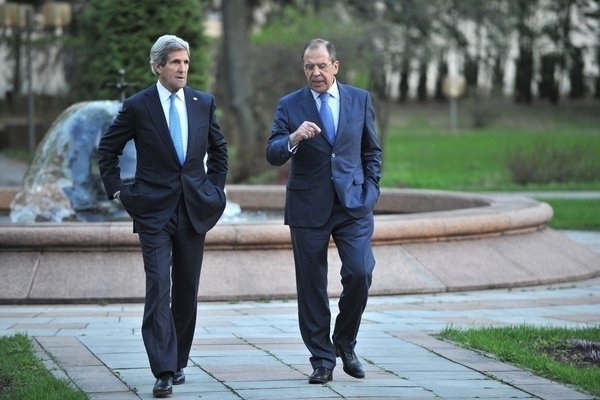 Preparations are underway in Moscow for a meeting between the US, Russian and Saudi foreign ministers in an effort to gauge Russia’s willingness to find a political solution to the Syrian crisis, more than 20 days after it commenced military strikes in Syria.

Speaking in Madrid on Monday, US Secretary of State John Kerry said that the United States would hold talks with Russia and its allies in the region – excluding Iran – in an attempt to avoid the "complete destruction" of Syria, as heavy fighting continues south of Aleppo.

“What should Iran do to be part of the solution in Syria? The answer is very simple: withdraw from Syria, stop supplying arms to the regime of Bashar Assad, and withdraw the Shiite militias it sent it; only then can it have a role.”

"Iran is currently occupying an Arab land in Syria,” said Jubeir, adding that, "Saudi Arabia believes that Assad must step down once an interim body, in accordance with the Geneva statement, is formed."

Meanwhile, the Russian TASS news agency quoted a Kremlin source as saying that Russian Foreign Minister Sergei Lavrov will meet with his American and Saudi counterparts “within days” in an attempt to bridge the gap on Syria.

Moscow had announced it had received a proposal from Kerry to convene an international meeting on Syria, with the participation of Jordan and Turkey, in addition to Saudi Arabia, Russia and the United States.

The Russian Foreign Ministry said that it was considering the proposal.

In a joint press conference in Madrid with Spain’s top diplomat, Foreign Minister José García-Margallo y Marfil, Mr. Kerry said that Washington had a responsibility "to try to avoid the complete and total destruction of Syria” and its subsequent implications for the region and Europe, particularly the spread of migrants.

The US had "a moral interest to try and stop this unfolding catastrophe", he added, noting that around 12 million Syrians have been displaced inside the country or sought refuge abroad.

Meanwhile, following a meeting in Istanbul between Russian Deputy Foreign Minister Mikhail Bogdanov with his Turkish counterpart, Ümit Yalçın, the Russian foreign ministry issued a statement saying that “the foreign ministries of Russia and Turkey are determined to continue an intensive dialogue on the Middle East issues, primarily the Syrian issue.”

The Kremlin also announced that Russian President Vladimir Putin will hold a meeting Tuesday with senior military leaders. According to Al-Hayat news agency, the meeting will discuss "the conduct of operations in Syria and an assessment of the results achieved until now."

According to the Kremlin’s Chief of Staff, Sergei Ivanov, the decision to conduct a military intervention in Syria "was not spontaneous or hasty." "In Putin’s meetings with diplomats and officers, all actions underwent long debates on the pros and cons," he added.

Ivanov said that the final decision was taken at a crucial meeting held overnight on September 29, the night before Putin received the parliamentary mandate permitting the use of force in Syria. The military operation was launched the same day.