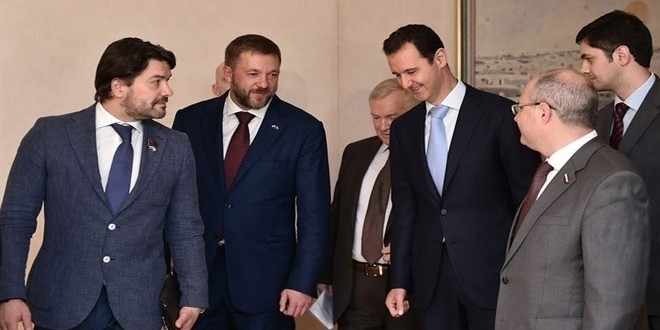 The meeting focused on the importance of consolidating deeply-rooted ties between Syria and Russia, particularly in the field of counterterrorism, humanitarian aid and economic cooperation.

President Assad voiced his appreciation of Russia’s support for the Syrian people, specifically in its war against terrorism, stressing Moscow's stance represents “writing a new history because this war will determine the future of the region and the world.”

“Eradicating terrorist organizations would lead to the political solution that we, in Syria and Russia, seek in a way that satisfies the Syrian people and protects Syria’s sovereignty, independence and territorial integrity,” he added.

Members of the delegation stressed the Russian peoples' support for President Assad’s counterterrorism efforts, which have set the foundations for the return of peace and stability to Syria.