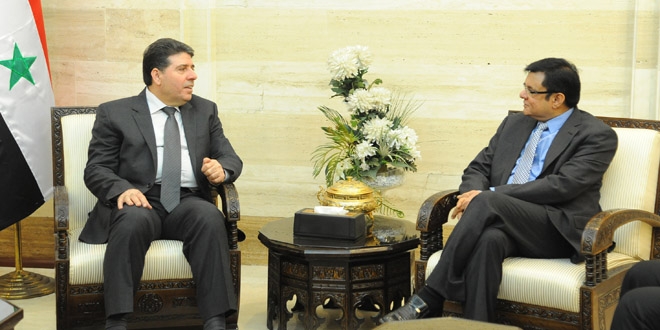 Meeting with India’s ambassador to Syria, Man Mohan Bhanot, Halki said the Syrian government is looking to expand trade with India in an effort to alleviate the impacts of economic sanctions and war on Syria, underlining the possibility of joint investment projects and encouraging Indian companies to take part in Syria’s reconstruction.

The prime minister lauded the role of the BRICS states in supporting causes in the region, as well as their support for Syria.

Bhanot, for his part, asserted his government’s keenness for improving economic ties with Syria. He also praised Syria’s efforts in combating terrorism and expressed confidence that Syria will defeat terrorism and rebuild what has been destroyed.

The diplomat said that his country believes a Syrian solution can only be led by the Syrian people without foreign interference, adding that India will remain committed to that position.