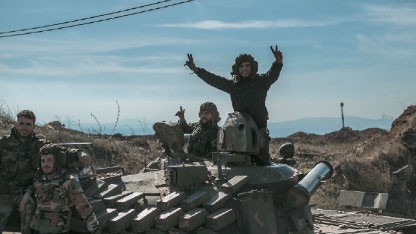 It appears the Syrian government’s insistence on proceeding with national reconciliations, in cooperation with international and humanitarian organizations, along with its continuing military victories, most recently the regaining of control of a number of villages in the northern Lattakia countryside, has pushed Nusra Front to carry out a failed large-scale attack in the Damascus countryside, while ISIS kidnapped 400 residents of Baghiliya in Deir-ez-Zor.

Al-Watan obtained information that a high-level United Nations delegation arrived to the villages of Fua and Kefraya at 3:00 am Monday, accompanied by representatives from the International Red Cross. There was a delay in the arrival of the UN delegation due to safety concerns, given that they would pass close to areas controlled by Nusra Front, Al-Qaeda’s branch in Syria.

In Quneitra, the head of the national reconciliation committee for the province, Mamoun Jareida, confirmed to Al-Watan that a ceasefire had been established between the pro-regime National Defense Forces militia in the village of Hadar and militants in Jabatana al-Khashab, and that work was now underway to extend bridges of communication between all sides and rebuild trust. The move aims to pave the way to a complete reconciliation in the villages of Jabatana al-Khashab, Tarnejeh, Owfaniyeh and the surrounding farms and return residents to their homes and land, while settling the status of those militants who want to, and pull out those who desire to leave to wherever they wish to go.

Meanwhile, Reuters news agency confirmed that ISIS kidnapped at least 400 civilians, including women and children, when they attacked the village of Baghiliya, north of the city of Deir-ez-Zor. At least 300 residents of the village were killed in the operation, according to Syria’s official news agency, SANA.