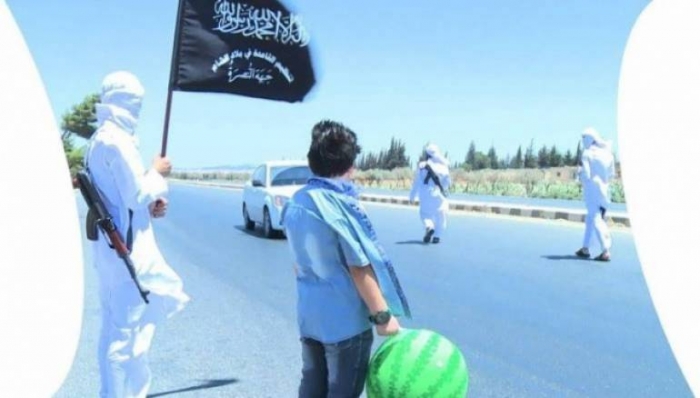 Al-Qaeda's Syrian branch, Nusra Front, increased its reinforcements this Monday inside the city of Aleppo, amid reports about the intention of the regime and allied militias to launch an offensive against militant factions in the north of the province in order to cut supply routes between Aleppo and its countryside.

Zaman al-Wasl correspondent in Aleppo said that Nusra had entered Aleppo city with a convoy of hundreds of heavily armed fighters on Monday afternoon, noting that the Front has distributed its troops in various neighborhoods of the city in preparation for any surprise attack by regime forces.

Activists in Aleppo city said that the timing chosen by Nusra to strengthen its presence in the city was inappropriate and that they suspect possible ulterior motives to the move.

Activist "R.H." who spoke on condition of anonymity for security reasons, said that the military situation in the city of Aleppo did not require the reinforcements.

R.H. told Zaman al-Wasl that “all people [in] Aleppo know that fronts fighting against the regime are quiet and [have] not undergone any change for more than three years, the most important front threatens the city if Kastelo road is controlled by the regime, and indeed the regime advanced from Bashekwa in the northern countryside,” adding that if Nusra is sincere in its intentions, “it should strengthen fronts in the countryside, not in the city."

Abo Khaled, member of the Free Syrian Army (FSA) in Aleppo, voiced his concerns saying: “after the big reinforcements sent by Nusra Front to the city of Aleppo, we expect them to start fighting us anytime with or without justification, as the Front had established several barriers in residential areas and distributed large numbers of masked gunmen, which points to only one thing – that the Front is against us, not with us.”

Abo Khaled added that on Sunday, members of Nusra Front at the Kastelo barrier had arrested two FSA fighters claiming they were members of the Islamic State. Nusra publicized the news of their arrest on social media, claiming that the two members had confessed their allegiance to ISIS.

Abou Musab al-Shami, a Nusra Front field commander in Aleppo, confirmed to Zaman al-Wasl that the group’s reinforcement in Aleppo is part of a boost in its presence along the fronts of Aleppo and countryside, adding that the move was planned to commence three months ago, but was hampered by military developments in the southern countryside.

Shami added: “talk about the Front’s intention to fight our brothers in the other factions was issued by people who have a preconception against the front, and they circulate rumors and wish they become right. But we in Nusra Front assure everyone that we are keen to fight the regime only, and if any disagreement happened between us and our brothers in the other combatant factions, we will try to resolve it through peaceful means because in the end we are all in the same battle.”

Responding to questions about reasons for establishing barriers in residential neighborhoods, Shami explained that barriers were not checkpoints and they are only guarding Nusra’s headquarters and other members from any possible attack by ISIS and the regime, citing the recent attack on Ahrar al-Sham Islamic Movement headquarters in Aleppo, which killed 18 people when a car bomb exploded in Sokari neighborhood.