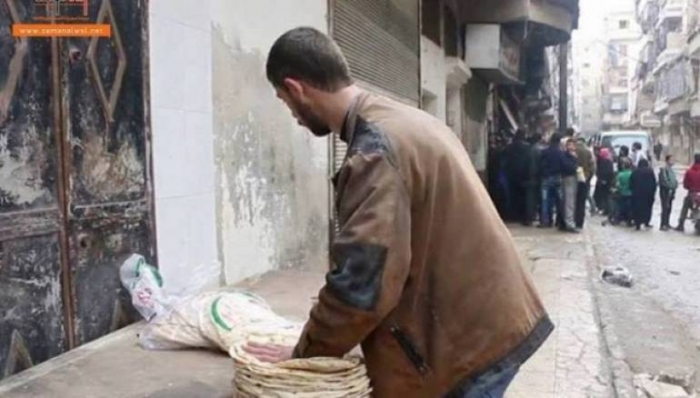 Syrian regime forces backed by heavy Russian air strikes have closed in on Aleppo city in their most significant advance since Moscow’s intervention in September in support of Bashar al-Assad's ailing government.

Opposition forces along with roughly 350,000 civilians are in rebel-held areas of the divided city of Aleppo and now face the risk of a government-imposed siege.

The rebel council in Aleppo, backed by the Syrian Free Police and the Sharia Court, has formed a crisis center to provide and preserve the essential needs of food and fuel at affordable prices.

Head of the council, Brita Haji Hussein, told Zaman al-Wasl that the “Crisis Operation Room” has already undertaken many procedures in order to secure residents’ needs, most importantly preventing food and fuel from leaving the city and forming a body responsible for the supply.

The operations room started on Sunday by running frequent patrols to prevent breaches, monopolies and thwart any attempts to smuggle products outside the city. The operations room would forward the accused offenders to court for punishment, Haji Hussein added.

Haji Hussein revealed that the council has spent most of its funds to secure fuel to support bakery furnaces, hospitals, civil defense groups and water pumps, but expressed doubts the available amount would be enough.

The council estimates that 140 tons of flour will be required to provide bread for 63,000 families under the council’s authority. He said the city has had no aid assistance from relief organizations, adding they have only offered words without any action.

Haji Hussein explained they have not yet received any help from the opposition interim government and the Syrian National Coalition, although the interim government promised to provide fuel via Turkey through a previous contract while the Support Coordination Unit would provide wheat.