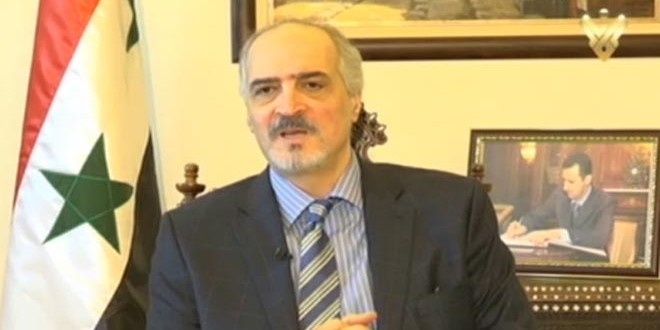 Syria’s chief negotiator at Geneva Dr. Bashar al-Jaafari stressed that the delegation of the Syrian government was not responsible for the failure of the recent peace talks in the Swiss city.

In an interview with the Lebanese al-Manar TV channel which aired on Tuesday, Jaafari clarified that UN Special Envoy for Syria Staffan de Mistura did not confirm that the Geneva talks had failed, but considered his decision as a suspension of the dialogue, “which did not start in the first place.”

“We didn’t actually engage in dialogue neither in substance nor in terms of form. We were all the time busy handling the dangerous formality and procedural gaps, without which being tackled we couldn’t go on to the substantial part of dialogue,” he explained.

Asked about whose responsibility it was for the impasse in Geneva, Jaafari explained clearly that the official spokesman for the opposition delegation announced, upon their arrival in Geneva and even before reaching the hotel, that they were going to walk away from the talks by Thursday if what he called “the regime” in Syria did not meet their preconditions.

The instructions later came by their Saudi and Turkish backers to walk away a day before they actually did, he said.

“They didn’t go for the sake of dialogue, but rather to foil it by setting preconditions. They knew in advance that things would go into a stalemate,” he added.

Commenting on statements from Riyadh on sending Saudi troops into Syria, Jaafari said such talk can only come from “amateur politicians who don’t realize what they are saying.”