Aleppo governor welcomes convoy of an ambulance, mobile hospital and relief supplies as part of a solidarity campaign with the city 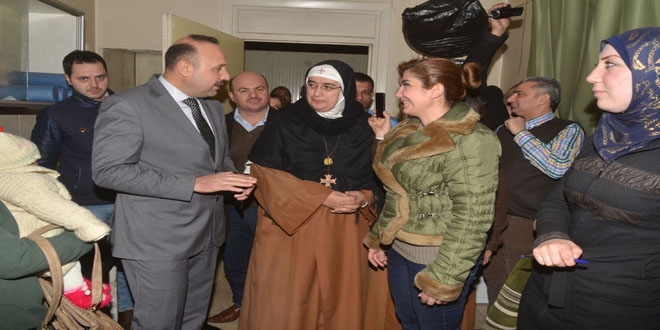 The aid convoy consists of an ambulance, a mobile hospital and 13 truckloads of relief supplies as part of a solidarity campaign with the city.

Aleppo governor Mohamed Marwan Olabi said that the show of solidarity is an affirmation of the spirit of cooperation between the sons of the homeland to alleviate the suffering of the families affected by terrorism.

In turn, Mother Superior of St. Jacob Convent Fadia al-Laham pointed out that the campaign aims at supporting the steadfastness of Aleppo’s citizens.

This campaign is part of the aid that St. Jacob Convent has been providing for a number of Syrian provinces since the beginning of the crisis, including two mobile hospitals in Homs and Daraa and a number of ambulances.