Syria crisis has greatly increased the number of beggars in the country, especially in the capital, due to the displacement of a large numbers of families 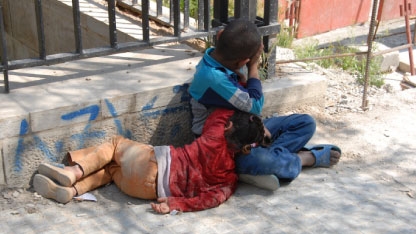 A judicial source estimated that the number of cases of begging received by the courts has risen to about 100 cases daily in various provinces over the past two months. The jurisdictions of Damascus and its countryside have received about 15 cases daily, most of them vulnerable children who have been transferred to juvenile centers for care.

The source told al-Watan that the current crisis in Syria had greatly raised the number of those begging in the country, especially in the capital Damascus, because of the displacement of a large numbers of families, which pushed many to beg. He estimated that in light of the crisis, the courts had viewed more than 40,000 cases of begging in various provinces, indicating a major increase compared with before the crisis.

The source said the number of females begging was larger than the number of males, saying this was because many of them had lost those whom they relied on for their living.

The source said that begging is not considered a major crime to be punished by law, but a minor infraction falling under the Magistrate Criminal Court. He added that most do not spend a long time in detention, even if they are repeat offenders.

The source added that the law considers acts like these as “misdemeanors” because those who are begging sometimes need to eke out a living. But the practice is socially unacceptable and so a correctional punishment is imposed to prevent them from beginning again and encourage them to look for a source of work, especially for those who are able to work.

The source said that the issue of begging is a social phenomenon which cannot be easily controlled. This is related to the campaigns of the police stations against the beggars, especially as they spread in large numbers at traffic lights in the streets, in addition to many children loitering.

The source said a new phenomenon had recently appeared, whereby children sit in the street and play a musical instrument with a carton in front them for money, as if to legitimize the act of begging. He noted this is still considered begging and is held to account under the law.

The source called for the interior ministry to increase patrols to control this widespread phenomenon, especially in the streets of Damascus, in addition to the large number of women standing at the doors of mosques. He said many charitable organizations are working on the ground to provide assistance to those who need it, especially to the affected families who have left their possessions, and so there should be no justification for begging.

The source recounted another story of a beggar who was throwing biscuits in the street and placing his hands on his eyes, appearing to cry, causing people to sympathize with him and give him money. When asked why he was doing this, the man responded that he considered his act a plan to win people’s sympathy, confirming that many people are trying to gain people’s sympathy through different methods, especially in light of the current conditions.