Syria’s Muslims and Christians are committed to their homeland and determined to defend it against all threats and conspiracies, says leader of the Syriac Orthodox Church 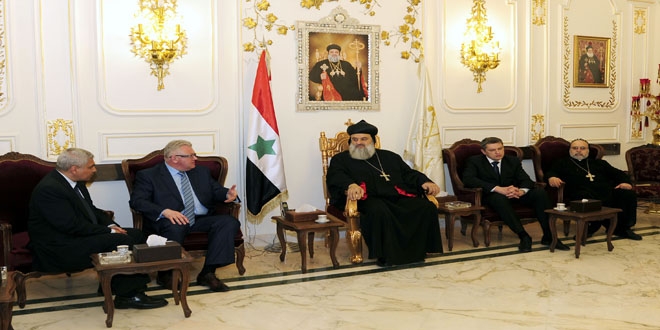 The Supreme Head of the Universal Syriac Orthodox Church, Mar Ignatius Aphrem II, stressed that the Syrian people will remain steadfast and united around the Syrian army and the country’s leadership untl achieving victory.

Meeting with the First Secretary of the Central Committee of the Communist Party of Belarus, Karpenko Igor Vasilievic, at St George’s Cathedral in Damascus on Wednesday, Patriarch Aphrem II said that Syria’s Muslims and Christians are committed to their homeland and determined to defend it against all threats and conspiracies, noting that Syria is fighting a war to preserve humanity and civilization on behalf of the world.

Throughout the years, Syria has maintained its reputation in the region and the Islamic world as a country of moderate mentality and an example of peaceful Christian-Muslim coexistence, he added.

The patriarch noted that Syria renounces all extremist acts committed under the pretext of religion, expressing hope that these temporary acts will come to an end paving the way to build modern Syria.