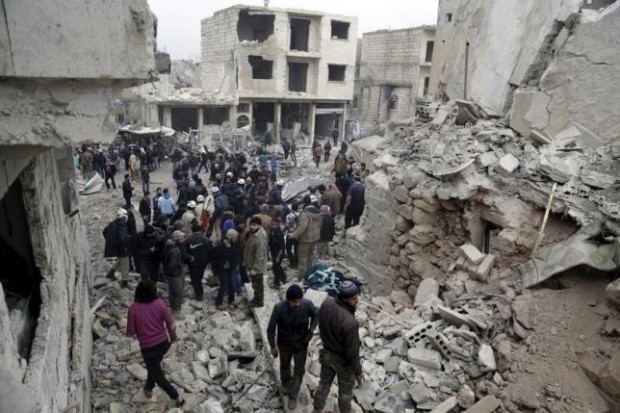 Within the consultations currently being conducted by the High Negotiations Committee on the viability of a temporary truce; Dr. Riyad Hijab convened a meeting of Syrian armed opposition representatives from all fronts to discuss the possibility of reaching a temporary agreement through which the foreign forces allied to the regime could cease hostilities waged against Syrians.

Dr. Hijab confirmed that the armed opposition have expressed their initial approval of a temporary truce agreement, in accordance with international mediation and UN safeguards to contain Russian, Iranian and sectarian militias and mercenary groups affiliated to them from fighting. Stressing that it is not possible to conclude an agreement of this kind with the current Russian air campaign and Iranian ground offensive, neither of which come with any real authority or power from the ground in Syria.

However, this initial approval comes as a reflection of the armed opposition's willingness to respond to sincere international efforts to stop Syrian suffering, and to put an end to aerial bombardments against civilians, which resulted in a mass exodus of tens of thousands of Syrians.

But sources within the armed opposition suspect that the truce cannot work unless there is a cessation of all military operations; lifting the blockades imposed by the regime and its allies on cities and regions to enable humanitarian access to deliver aid, and the release of all detainees, especially women and children, in accordance with United Nations resolutions and the agreement reached during the International Syria Support Group meeting in Munich on Thursday, February 11.

Towards the end of the meeting, Dr. Hijab expressed his satisfaction at the consensus reached between the various armed opposition on a truce in accordance with the above identified provisions and guarantees. However, he also stressed that he was under no illusions that the regime and the powers behind it will abide by any ceasefire or accept a cessation of hostilities, because they know fully well that the regime's survival depends on continual crackdown, killings and forced displacement, hence to achieve any progress on the political or humanitarian front is not their desired aim.

Hijab added that the High Negotiations Committee will be holding an emergency meeting on Monday, February 22, to re-evaluate what has been reached in regards to a tentatively approved truce, and discuss ways to provide the necessary guarantees and commitment for its success.