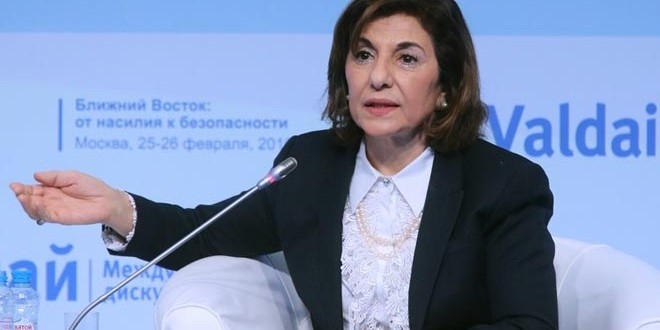 Bouthaina Shaaban, political adviser to President Bashar al-Assad, said Thursday that countries supporting terrorism in Syria must be stopped, noting that the Syrian government has been working since the beginning to find a political solution to the crisis.

On the sidelines of the Valdai International Discussion Club held in Moscow, Shaaban told Russia Today TV that Ankara and Riyadh – as well as other sides – are supporting and fostering terrorism in Syria, adding that “a matter that must meet an end as the US stance regarding these sides should be clear as the Russians'.”

She clarified that the Syrian government has been working since the beginning of the crisis to find a political solution yet “the oppositions” have thwarted each endeavor to put an end to the bloodshed, adding: “it was clear that those coming from Riyadh are the sides who foiled Geneva III and that is why we do not take what they say into consideration because they are part of the problem and we hope that they become a part of the solution.”

Shaaban said that Damascus has accepted the Russian-US ceasefire agreement and showed its readiness to work with Moscow to implement the deal and continue combating the Islamic State group, Nusra Front and other terrorist groups.

She stressed that upcoming legislative elections in April are constitutional and have nothing to do with Syria’s acceptance of the Russian-US deal.